Cultists in court over arm possession 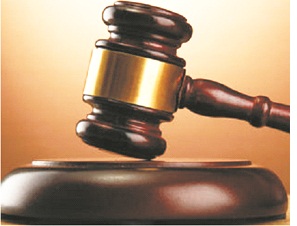 Cultists in court over arm possession

Fisayo Akinduro, Osogbo
|
Two suspected cult members, Afeez Adigun, 30, and Ademola Akeem, 21, have been arraigned before an Osogbo Magistrate Court for unlawful possession of guns and breach of peace.

The accused persons committed the crime on October 29, 2019 around 10am in Osogbo.

The prosecutor, Temitope Fatoba told the court that the duo were suspected members of the Eiye confraternity and unlawfully engaged in fight in a public place which caused breach of peace.

The accused persons were arraigned on five-count bordering on conspiracy, unlawful possession of gun, charms, cultism and causing breach of peace.

They pleaded not guilty to the charges levied against them,

The defense counsel, I.A Durosomo, while applying for their bail assured the court that his clients were ready to stand their trial.

However, Fatoba opposed the bail on the grounds that the accused persons were terrorising public peace.

He also explained that the first accused person Afeez Adigun is an ex convict with the nickname “terror”, and got back from prison around May.

Durosomo responding the prosecutor’s described the statements as mere speculations.

The presiding magistrate, Adebola Ajanaku in her ruling admitted the accused persons to bail in the sum of N500,000 each and two sureties in like sum.