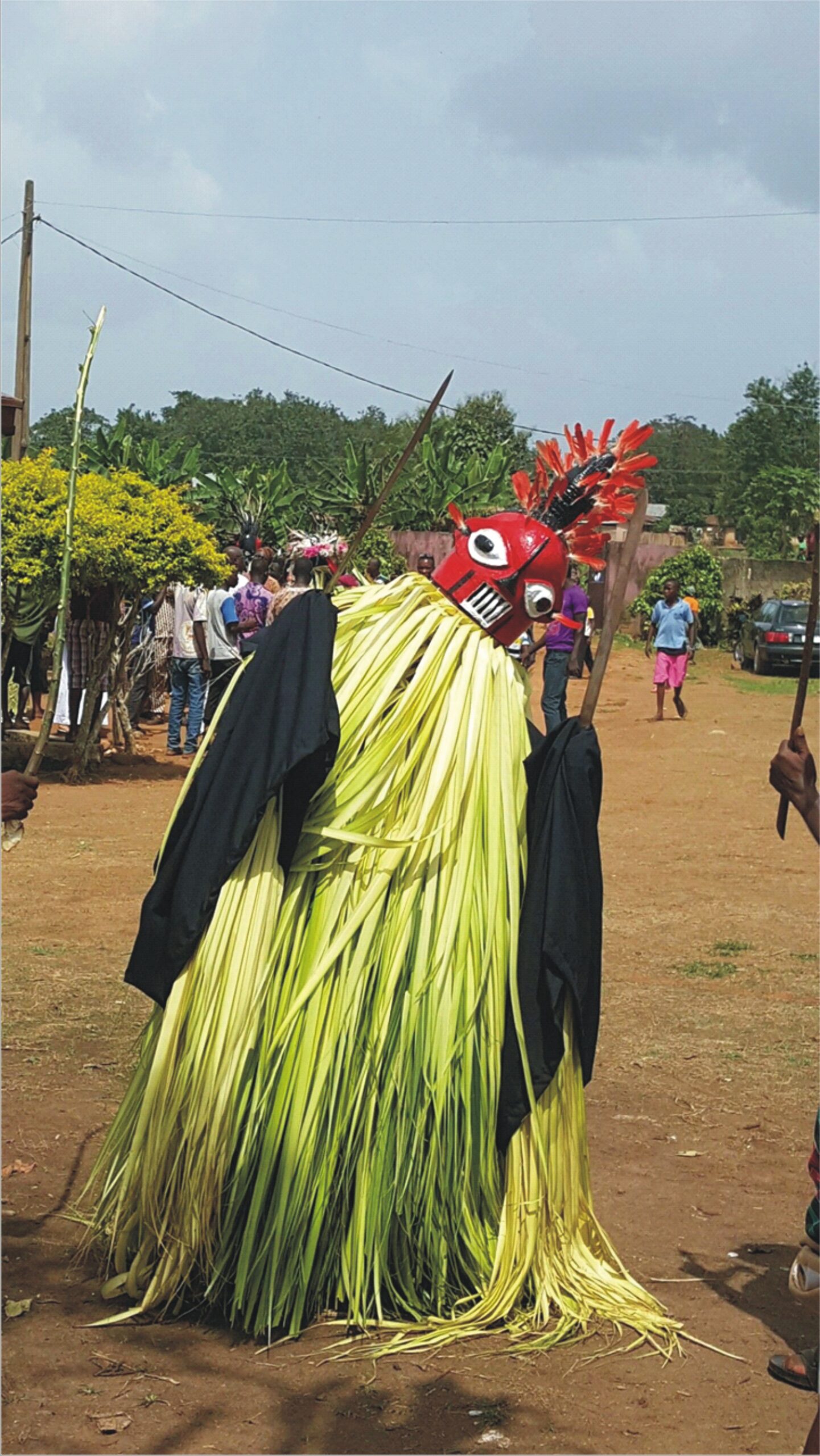 Masquerades are believed to be representatives of the dead, it is believed that the dead visit the living from time to time through this medium.
Clothes play an important role in the world ,more elaborate dress reflects social power and prestige, in performance honouring ancestors exquisite clothes is the major medium for the markers transformation
Masquerade costumes was composed of multiple layers of clothes lappets made from expensive and prestigious textiles expressing the wealth and status of a family as well as the power of the ancestors.
Masquerade are male dominated in the performance aspects and only male are allowed to connect with the spirit by transforming into the masked figure
Women are important in creating the materials used for masquerade costumes, dramatizing the performance of masquerade, singing, dancing and watching but women are not allowed to put on the masquerade costumes in most cases because of their powers and also in the cases of their mestral flow
Costume plays an important role in the world of the Yoruba masquerade. Yoruba beliefs equate nakedness with infancy, insanity, or the lack of social responsibility. More elaborate dress reflects social power and prestige. In performances honoring ancestors, good and well tailored cloth is the major medium for the masker’s transformation.
The composition of an Egungun ensemble has several distinctive features. The layer worn closest to the masker’s skin, the undersack, must be made of Aso-Oke, the indigo and white strip-cloth . It closely resembles the shroud in which the dead are wrapped. This sack, along with the netting for the face and hands, must completely seal the masker’s body. The netting effectively disguises facial and hand features that might disclose his identity.
On top of this base are layers of lappets. As the masker whirls, the lappets are sent flying, creating a “breeze of blessing.” The design of the costume is therefore closely related to the choreography of the performance.
To make the costume beautiful, and thus powerful, the lappets are decorated with patchwork patterns, braids, sequins, tassels, and amulets. The amulets hold medicinal preparations which have performative power, providing protection against enemies at a time when the transformed person is vulnerable. The main protective amulets, however, are on the inside of the costume, not the outside. Metallic objects are also sewn onto the garment. These catch the light as the wearer moves, creating flashes that suggest connection to the spirit world, orun.
An ensemble is repaired and refurbished for use year after year, with layers of new lappets and amulets added to express remembrance and honour. Depending upon its wealth, a family may own several types of Egungun costumes, which may represent specific or collective ancestors of the lineage.
The Egungun ensemble acts as the medium for the masker’s transformation into his ancestors. An Egungun society is composed of men and women whose lineages have the right to present the masquerade. Men do the masking. Women never wear the costume, although they participate in the chorus that sings the oriki praise poems and histories of the families.
Egungun have Omusoro, boys that followed them all around during the festival and at important occasions they performed to the delight of onlookers.
In Owo, we have some of the masquerade customers on display in the gallery.
Akaro masquerade (Monkey), when he comes out during the festival period, people run away from him, but still entertains from a distance.
Gbogi masquerade, this is a very peaceful and friendly masquerade. When he comes out during the festive period everyone is exited, children run after him. It is also believed that when a sick child is brought before him for prayers such child get well. the masquerade is from Isapen quarters in Owo.
Costume of masquerade is significant to its cultural reality and cannot be neglected because it is an old practice that best described the purpose why the masquerade is in the society.
Therefore, the regalia of the masquerade requires great care from museum’s professionals in order to ensure it does not distort the historical relevance of culture.
Adebowale sent this piece from National Museum, Owo