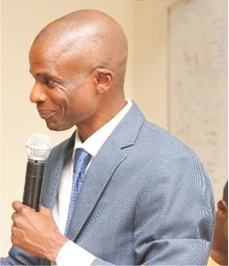 By Sunmola Olowookere
|
A possible way out of the increasing spate of banditry, terrorism and other violent crimes plaguing the country is for the government to think beyond the acquisition of arms and ammunition and leverage on cyber security through information technology.

A professor of Information and Cyber Security at the Federal University of Technology Akure, FUTA, Prof. Boniface Kayode Alese dropped this hint in an interview with The Hope .

Alese, who insisted that the security strength of any nation is no longer measured only by the amount and sophistication of weapon in her arsenal but also the level of her know-how in cyber security.

All over the world, he said, there is a paradigm shift in security affairs as nation’s security strength is no longer based on their ability to have certain equipment such as machine guns, bombs among other vital tools for protection.

He noted that the security strength of a nation now is measured by her intelligence ability.

His words: “When we talk of the intelligence ability of a nation, we are moving towards the area of cyber security.  No matter the weaponry of any nation, her security could be caught off guard and disabled by an attacker with a better experience in cyber security.

Alese regretted that Nigeria is not where it should be in terms of cyber security and intelligence gathering leverage through information technology.

He said it is not only in the area of security that Nigeria has failed woefully in leveraging the sector on information technology but also in various other sectors such as health, transportation, infrastructure among others.

He said the only thing talked about in terms of cyber security problem in Nigeria is Yahoo Yahoo, which is described as the least in Nigeria security challenges.

The university don said technology is advancing all over the world, saying Nigeria need to progress beyond the level it is now security wise by leveraging on information technology to deepen her intelligence gathering.

He said security agencies in the country need to concentrate more on intelligence gathering by training their officers to acquire modern knowledge and expertise in cyber security.

“I want to see Nigeria’s military and the police getting more involved in cyber security because as technology is advancing, so is terrorism. Our security infrastructure need to be networked through information technology.

In doing this, government should consult the right people.  The federal government should also know that we have the intelligentsia in the academics.  They should invite us to a meeting together with the security officers in the country in proffering solutions to the nation’s security challenges.

He added that the country need to embrace intelligence gathering and the relevant information technology skills.

He gave example of a country like Rwanda which he said faced genocide in 1994 and that since 2011, technology wise, the country has really developed and now known as the tech-hub of Africa today.