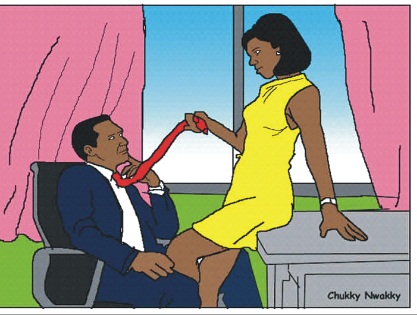 Office flings has become a common thing in many establishments and organisations today. This an arrangement whereby a man and a woman within the same establishment engage in a form of relationship; mostly romantic alone.
This situation is gaining grounds by the day ,and it does not have to do with the nature of such an organization, whether public or private.
Truth is, love can be found anywhere, on the street, in the city, village, office or wherever. There are cases of couples who met each other in their place of work, start a fling which later metamorphose into marriage. There is nothing new or wrong about it.
While many think that most office relationships do not work, recent happenings have proved that everything actually depends on what individuals want.
Once you have a soft spot for the opposite sex, the place of meeting has nothing or little to do with whatever happens thereafter. For those who have reservation about hooking up with a colleague in the office, the question is , would you have gone for him if you had met him in another place ? If the response to this is yes,then your relationship could go since he is the person that you love ,not the office.
Again, when it comes to choosing partners, men and women need to be careful. If one commonises the other person simply because they are both colleagues in the office, then of what benefit? Any one who could earn your respect elsewhere should be able to earn your respect as a colleague in the office.
In as much as there is nothing absolutely wrong with having an affair in the office, such relationship must be clearly defined and gone into with extra caution. Both parties must know where they are heading to.
A lady should not think that a male colleague has an ulterior motive just because the latter is showing some kind of preference for her. Similarly, a male should not nurse the feeling that he could gain access to a lady’s heart whenever he wants just because the latter is friendly.
So, from the very beginning, colleagues of opposite sex who have special interest in each other should state on what grounds such friendship will stand.
There is no doubt about the fact that many relationship grows from friendship. This could also happen in the case of colleagues in the office. However, issues should be handled based on the level of intimacy between the duo.
While both remain friends, all that transpires should strictly be based on friendship levels. If, on the other hand, both decide to take the friendship to another level, then the nature of the relationship could change. This could allow for deeper friendship and intimacy.
The kind of intimacy enjoyed with a colleague who is a mere friend should be different from that of a colleague who doubles as a lover.
If a woman allows a male colleague to handle her carelessly at friendship level;then, she might be done for and vice versa. In the end, when one party has already served his /her mind on why he / she was in relationship, you just hear the he/she saying what merely exist between them was a platonic friendship.
Later on, you hear the other party who ‘feels cheated ‘crying foul. This could have been avoided if both had agreed on terms for such friendship.
One thing is also paramount. No one can discern the mind of a fellow human being. A male could express his mind to a female colleague whom he admires anytime. It is the duty of such a lady to thoroughly investigate the guy to know if he is genuine.
Believe it or not, many of these individuals are mere cheats. If the lady carries out her investigation with all objectivity, her findings will reveal to her the kind of person the man is and she would be able to take a stand on whether or not to accept such proposal.
All that has been stated could only be appropriate when the individuals involved are unmarried. But people have now taken office romance to a higher dimension.
Today, the number of married people who engage in office romance surpasses those of unmarried ladies and men who engage in the act.
The situation has gone so worsened that some even sleep with each other right inside their offices.
The nature of such relationship itself shows that it is not based on love. One would go to a length to protect and respect a loved one and such person will not be treated like a dog. For it is only a dog that could be slept with anywhere and at any time.
But for lust ,how else could one define a sexual relationship that exists between a married man and a woman in the same establishment ?What could be more debasing than the nude pictures of office lovers engaging in the act being circulated among members of the same organisation ?