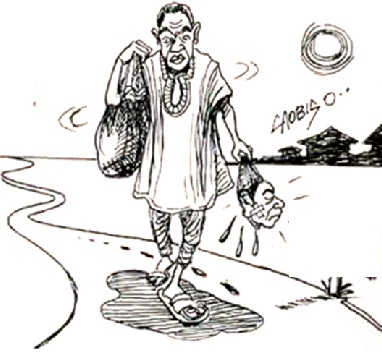 A popular medicine man is going through fire in our neighbourhood as he was said to have defrauded some groups of fraudsters popularly known as “yahoo boys” of their ill gotten money. He had prepared a charm for them but according to them, the charm did not work as he claimed.
The boys realized that they had been swindled. They were shocked to the marrow that an old man could beat them at their trade despite their knowledge of how to make unsuspecting people part with their hard earned cash.
The popular medicine man (name withheld) is a fearful one in our neighbourhood. He is believed to be powerful. His clients come from different parts of the state as he advertised his services all over the radio.
Residents wished that he would just leave the neighbourhood one day as our neighbourhood was too advanced to harbour a medicine man of his repute.
He rears animals that are not well liked in the society such as cats, sheep and ducks.
To make matters worse, he allows them to run free. The flock of sheep would be bleating and passing faeces all over the neighbourhood while the cats now fully grown eat our chickens for dinner.
They look for those that are not secured properly in a cage and pounce on them.
The only thing that would be left for the owner are some feathers of the unfortunate chicken.
Despite this, no one could go to the medicine man and complain. For one, he takes care of mentally imbalanced people and they roam freely in his compound. Another point is that we see medicine men as evil people, hence people stayed away from him except those that patronize him.
He had grown rich in the business of practicing traditional medicine and he has several cars, wives and children which he had gotten through the business.
Many of the wives he married are young girls whom he had treated for madness. He married them because they either could not pay his fees or he hoodwinked them. Some of them had been neglected by their families.
He was building an empire in our neighbourhood and no one could control him.
However he got into trouble when he did charm for the yahoo boys. The charm was a black substance prepared in a snail shell with two cowries. He had promised the boys that when they use the substance they would be able to detect potential “customers.”
Things got wrong when the charm did not work as expected. The boys had paid N250, 000 to the medicine man for the charm.
Hence they saw red when the charm did not work.
They came to his house and gave him hell. They shouted to the heavens that they have been defrauded. They demanded for their money.
They were fearless in their demands. He assured them that it would still work but they were having none of it. They simply wanted their money back.
The residents of the neighbourhood
were amazed at the daring of the boys.
The medicine man threatened them but they were not fazed. They told him that they would get back their money whether he likes it or not.
The following day, Police men came to arrest the medicine man and he spent two days with them before he came home. Gossip even has it that he had to sell one of his cars to settle the police and pay off the boys.
With that, he was demystified and residents no longer feared him as they did before. Indeed, if he had powers, the yahoo boys should not have been able to rubbish him as they did.

When madness runs in a family