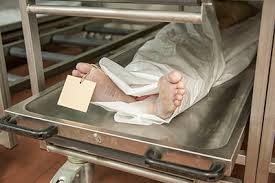 About 262 corpses still dot eleven morgues in Ondo State government owned hospitals, The Hope can authoritatively report.
The state government recently issued a month ultimatum from May11, 2020 to residents with corpses in morgues of government hospitals to evacuate them or risk mass burial.
According to impeccable sources, a sizable number out of the total number of corpses available in the 11 morgues across the state have been evacuated by affected families.
Most of the heads of the hospitals who spoke with The Hope revealed that there have been an impressive turn out of people across the 18 local government areas of the state.
Dr. Ayo Olabanji of General hospital, Ile-Oluji explained that the 50 capacity morgue of the facility was left with just 12 corpses.
In Irele General Hospital, the 50 capacity morgue had an average of 25 corpses left following the government’s ultimatum according to Dr. Alex Sogbe.
Dr. H Ogunbiyi who is in charge of Iju/Itaogbolu General Hospital hinted that the facility had 18 corpses left as at the time of filing in this report.
According to Dr. Adeogun Olufemi of General Hospital, Idoani, the 30 capacity morgue had 12 corpses before now but it was now left with just four corpses.
At the State Specialist Hospital, Ikare- Akoko, Dr. Ayodele Ogunlade stated that the facility has been reaching out to people to get their corpses out of the 80 capacity morgue and added that “there were 22 corpses left.”
According to Dr. O. Edugbola of General Hospital, Ipe-Akoko, in the last few days, five corpses were evacuated, noting that the 25 capacity morgue had 24 corpses before the ultimatum was given.
Dr. Olugbenga Makinde of Igbara-Oke General Hospital explained that virtually all corpses have been taken away from the 60 capacity morgue, saying “we had 23 corpses before now but we are left with just four corpses.”
At the UNIMED Teaching hospital, Akure complex, the Physician in Charge, Dr. Adesina Akintan affirmed the strict compliance of residents of the state to the directive.
Director, Diagnosis Services, Ondo State Hospitals Management Board, Dr. Olumuyiwa Pelemo in a telephone interview commended the people for their quick response to the directive noting that there have been drastically reduction in the number of corpses in morgues.