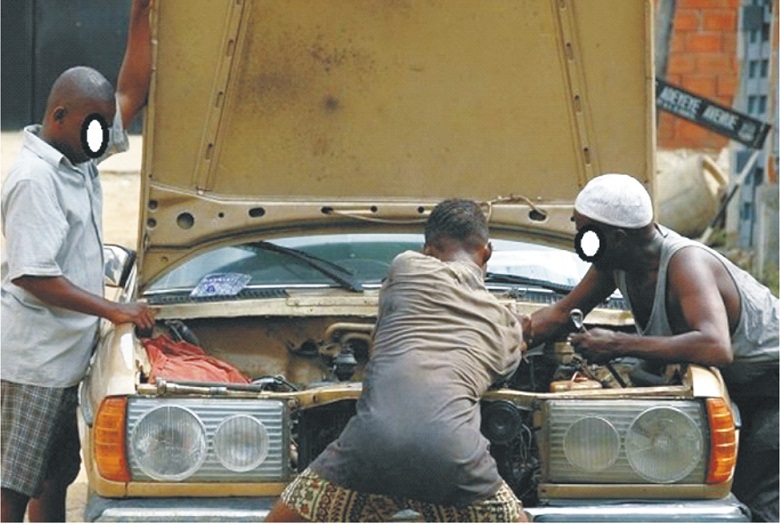 Mr Ismael Kasali, a 55-year-old automobile mechanic, failed to deliver his customers’ jobs at the dates earlier given which resulted into fracas between them. Some of his customers who could not exercise patience angrily drove their vehicles to another mechanic shop where the vehicles could be fixed.  Mr Kasali lamented that failure of youths to show interest in artisan works was the major reason for not meeting up with his customers’ expectations which made him to lose them to others.

The man disclosed that shortage of apprentices was the major challenge facing artisans, as he noted that most of the youths preferred jobs that would earn them daily income to spending years learning skills. He said: “It is appalling that our youths no longer enrol as apprentice mechanics. If I have up to four or five apprentices under me, it will be easier for me to deliver my job on time, because I will have people to assist me even as they learn the skill. Most of them have now opted for commercial motorcycle business popularly called Okada, forgetting that learning any skill is a life time investment.

“Not less than six apprentices have registered with me and left without completing their terms because they could not endure.  There is need for parents to monitor their children who are learning skills otherwise, they will become social menace in the society and constitute a burden to the entire family.

“Parents should also shoulder the responsibility to see that their children acquire some vocational skills along with their education. Government should encourage the youth by giving loan to anyone who wishes to set up a small scale business, based on skill acquired. The skill I learnt many years ago is putting food on my table today. I got married, started having children and built my own house. Today, I have God to thank because I have built the second house from the money I am getting as an automobile mechanic,” he said.

Apprenticeship entails learning a skill or craft from an expert by working with them for a set period of time. There are no professional licenses or degrees required to become a commercial mechanic, carpenter, bricklayer, vulcanizer, panel-beater or welder, among others. A novice can gain experience by working as an apprentice with a professional for years. At completion, workers are certified as skilled in their particular jobs.

However, it has been observed that there is a dearth of youths going for apprenticeship these days. This is the reason one hardly sees apprentices in some workshops, compared with what we had in the early 80s – late 90s. Just like Kasali’s submission, other artisans who spoke with The Hope blamed youths neglect of skill acquisitions on the get rich quick syndrome which made them take to Okada riding, Point On Sale (POS)business,   internet fraud and armed robbery, among other nefarious activities.

According to an auto mobile technician  based in Akure, Mr Abiodun Adelana, youths’ desire to make money through any means today is fearful and calls for concern. They prefer engaging in internet fraud or riding okada to learning a skill, yet, both have no prospect. “The trend now is yahoo, motorcycle and POS. Youths are not interested in learning trades that will subject them to rolling on the ground which the jobs of  mechanic and others entail. If you survey one hundred of these workshops round Akure, hardly can you find three apprentices. In my workshop now, there is no single apprentice. The last time I had an apprentice was five months ago. They come and go. They are not ready to learn.”

Sharing a similar view, Mr Friday, another automobile mechanic, attributed the major factor responsible for the problem to the inordinate desire of youths to engage in ventures that can earn them quick money. Aside this, he said that many of today’s youths want to engage in any profession or trade that is not stressful. They do not want to be under the supervision of anybody. Many of the technicians are worried that in the long run, there may not be people who will succeed them.

His words: “The only solution to the present economic situation is skill acquisition. My son, a university graduate, is now earning his living as a photographer, the skill he learnt immediately after  his one year  National Youth Service. He was forced by his mother, with my support, to acquire the skill, with the intention that before he would be through, he would have gotten a government job. He completed the photography training after a year and some months without getting any government job except being a teacher in a private school which he rejected.

“He has since forgotten about getting a white collar job, because he is doing well as a photographer. He is married with kids and sustaining his home with the money he gets from his acquired skill. Some of his friends who graduated with him  from the same university now envy him because he is better off. Youths should not see skill acquisition as demeaning. That is the future of this country. I know a lawyer who is a fashion designer. There are some graduates who are shoe cobblers. Aside the fact that riding okada is dangerous, it has no future. I wish our youths could spend their time wisely. They have the time and energy on their side now and they should not waste that rare opportunity,” he advised.

Also, Mr Ifedayo Akinlaja, a welder who beamoned youths’ neglect of skill acquisition, explained that as at last year June, he had five apprentices under him, but now he has just two. “What surprises me most is that two of those apprentices who left my shop are now riding okada, I was told that the third one is into internet fraud. Youths must be made to understand that the disadvantages of riding Okada as a profession outweigh its advantages. Youths in Nigeria constitute more than 40 percent of the total population. Obviously, the youth should form a larger pool of potential assets that can make valuable contributions to the nation’s economy and industrial development, if they are resourceful assets.”

In the submission of another artisan, a vulcanizer, Mr Segun Mebinu, who blamed the trend of jettisoning skill acquisition by youths on modernisation, feared that if it continues, there will be nobody to take over the occupations.  He said: “It is worrisome because people have neglected the fact that when you are armed with handwork, you can establish yourself without waiting for white collar jobs. Modernisation can also be ascribed to the low turn out of youths in apprenticeship. Some of them even see the work as dirty. Quick money without following the right channel is the order of the day. Most of our youths are day dreamers, forgetting the fact that craft  can lead them on the path to success.

“One of my apprentices is a graduate who just started early this year. Initially, I didn’t want to accept him because I thought he would not be serious, being a university graduate, until when his father explained to me that his uncle in London wanted to assist him to travel out but the condition was that he must acquire a vulcanizing skill. He is more serious than those he met on the job. That is to tell you how important it is for anyone to acquire a skill.

” Many Nigerians outside the country are surviving based on the skills they acquired. I learnt that fashion designers, hair dressers, mechanic, rewire, vulcanizer and other skills are in hot demand in the Western world. I will only advise the youths to get themselves fixed up, instead of sticking to Okada riding that has no future. Many youths are unemployed, owing to the fact that they lack entrepreneurial skills, creativity and ideas that can make them self -reliant. Some of them now turn out to be  touts, engage in crime and other undignifying activities. It is advisable for today’s youths to acquire skills. Relying only on certificates for survival cannot solve the problem,” he advised.

Should holiday be for skill learning or lesson?