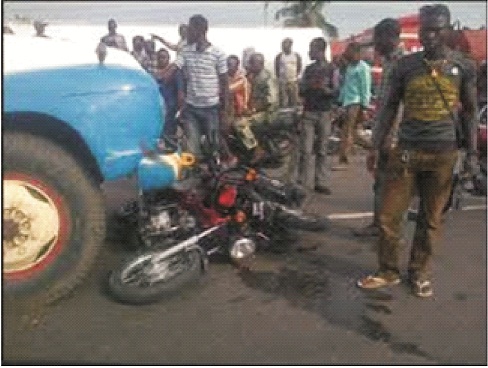 By Tola Gbadamosi
|
The prompt intervention of the police saved Oba-Ile, a suburb of Akure, Ondo State capital from snowballing into a boiling cauldron on Saturday following the death of an Okada rider.

The 20-years-old Okada rider, John Lohbut was crushed to death while fleeing from law enforcement agents during the monthly environmental sanitation exercise.

Eye witnesses’ account told The Hope Metro that the deceased who hailed from Lantang in Plateau State was rushing home from his security duty post to beat the environmental sanitation deadline when he met his untimely death.

The source claimed that Lohbut ignored the stop order of the policemen on the road only to run headlong to a truck on a top speed which crushed him beyond recognition.

The mangled body of the deceased reportedly ignited his kinsmen who mobilized available weapons to attack the police.

The Hope correspondent who witnessed the rampage said every effort to placate Lonbut’s kinsmen fell on deaf ears as they cordoned off the long stretch of the Oba-Ile/Airport road burning tyres and attacking security personnel.

Even the presence of the Commissioner of Police, Mr Adeyanju who made spirited efforts to douse the tension as the protesters made daring attempts at his entourage could not stop them.

This bravado, The Hope noted, led to more reinforcements of policemen who later brought the mayhem under control.

The policemen were reinforced to get the situation under control.

Speaking on the development, the SA to the governor on Hausa and Fulani Matters, Hon. Bala Umaru said “I was alerted by the SSA on security on the crisis. On getting here I realised that they were the Lantans from Jos”.

“Thank God things are under control, Kabiyesi has talked to them and will see the Area Commander  how to save further occurrence, he said.

He appealed to the youth to be calm and not to take laws into their hands.

The Oloba of Oba-Ile , Oba Oluwadare Agunbiade urged the youth to control their emotions, saying that they have been together for long living peacefully to the extent of marrying daughters of the community.

He said, ” If you start any trouble from this, the community will suffer more for it. I am appealing to you not to take any further action, take it that what happened to you is from me and forgive for the grace of God. This will not happen again”

A close friend to the deceased, David Chirpyen Lohvang who spoke with The Hope Metro also from the same local government area said ” we all mourning the sudden death of our brother because we are all brothers here in Ondo state.

According to him, Lohbut was a very hard working young man with great dreams.  planning to go to the College of Agric next section which led him into many trades like Okada riding, mechanic as well as night guard to make sure he makes ends meet.

He disclosed that the community people at Oba Ile like him so much and he was very popular among them.

“Seeing his scattered body on the road remains a retrospective bad dream we can never forget for a very long time. We are not happy at all. We wish justice should be done on this ugly event” he said.

The Hope Metro  attempted to get the police confirmation which proved abortive due to communication challenges.