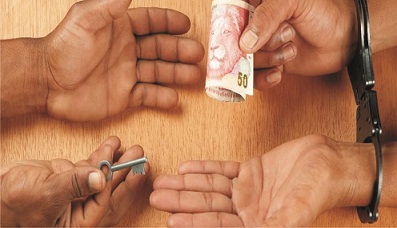 By Bayo Fasunwon
|
Do you give or receive bribes? It is easy to answer in the negative to this probing question. However, one may not be able to answer until you realize a bribe is that valuable object or service demanded or given in order to get someone’s favour. Bribe is therefore an inducement given or demanded in order to give favours (deserved or undeserved).

In other words, a bribe is the purchasing power in a competitive environment. In an environment given to the supremacy of merit, a bribe is not only seen as a crime, but also an injustice to the society.  However, contrary to myopic opinions, bribes do not only come in the form of cash, it is also demanded for and paid in kind.  When services are given as inducements for favourable considerations, then it is a bribe given in kind.

Why do people demand for or give bribes? The answer is simple, but sometimes difficult to accept, especially from the puritan perspective. People offer or give bribes in order to have an edge over other competitors. The value placed on the object of competition determines to a large extent the bribes they would be willing to offer in order to outsmart their ‘opponents’.

Therefore bribery thrives in any economy where poverty, hunger, unemployment and frustration prevail and the level of privation is high. It also prevails in any society that has embraced the pleasures, and not the rigours of modernization in an environment of low wages. Bribery would thrive in any mono-product economy, attendant scarcity of resources and blocked access to needed essentials of life. Whenever a country pays low wages, escalated taxation and expects the citizens to provide for themselves (what government needs to do), bribery would thrive.

Reports have shown that bribes are demanded and offered at various levels in Nigeria. We are in the season of budget consideration and passage. In the past, Senators and members of the legislative houses have been quizzed on their involvement in the demand and collection of bribes for the safe passage and ‘padding’ of ministries’ budgets. The P&ID embarrassment has also shown that nationals could betray their country and subject it to bankruptcy for selfish and paltry gains.

Efforts of footballers are disdained by the reception of bribes in order to fix matches or determine tournament venues.  There are people who have also recounted that they had to give bribes or offer to pay part of their salaries to particular persons, as a bribe in order to get a job. Bribery, of a truth has become the game changer in the world. But why do we see an increase in demands for bribes in Nigeria?

When welfarist state, embraces capitalism, the perception of the citizens change from cooperation to competition. Every good and service becomes a commodity that must be traded, and which goes to the highest bidders who are able to pay the price demanded by the sellers. In this light, every position occupied by any in the newly emerging capitalist state becomes a thing to trade with in order to achieve the necessary desires of the person in power.

Capitalism prospers the entrepreneurs. They are able to sell their products in the market and make daily remunerations with profits. For this group of people, the rising cost of petroleum, taxation and other bills become an opportunity for them to adjust the size, price, quantity, and quality of their products in order to make money. Therefore in a capitalist economy, those in the private sector and informal sector become catalysts of inflation and beneficiaries of government’s insensitiveness. What happens to the people in the Civil, Public or even no service? They would also need to adjust and survive in the harsh economy. Since salaries are fixed, the other alternative to ‘be at par’ with colleagues is bribery. Therefore, civil servants demand for bribes in order to push files, make recommendations or even certify the qualitative work done by contractors. It is not also news that teachers (at all levels) demand for gratification in cash and mostly in kind.

Given the cashless policy, and traceable nature of bank transfers, the coming years would witness the movement of large chunks of cash in different types of bags to the recipients of bribes. In many climes, these bribes are seen as monetization of encouragements to do the needful. There are however many who may not want to collect cash, and would prefer to be paid in kind. Unlike cash payments of bribes, not all types of kind payments of bribery are easily traceable. In Nigeria, politicians bribe electorates by giving them foodstuffs, donating motorcycles, and ridiculous materials to their impoverished constituents in order to get their votes at elections. Therefore elections in Nigeria are no longer won on the basis of ideology, programmes or achievements, but on the altar of bribery in kind.

It is not also news that teachers (at all levels) demand for gratification in cash and mostly in kind. The nation has placed high premiums on certificates, hence the desperation by all to get certification, even for their ignorance. Thus, secondary school students pay huge bribes in order to get help to pass their final examinations. Many miracles (bribe induced) schools and centres dot the face of the country. Any student who successfully pays the bribe demanded would be sure of passing in flying colours, even if such did not sit for the examinations. This certificated ignoramus would gain admissions into tertiary institutions and would be willing to bribe themselves out of school. Gullible tutors do not only fall to lure of easy cash and mostly lustful flesh of the prostitutes in academic garbs, but also stoop low as to demand bribes in kind from unqualified students. These ‘kind’ demands range from clothings to cars, and other materials. But the most popular of these is sexual gratification for academic success.

Whichever way it falls, and irrespective of the nature of bribes, a bribe represents the installmental death of any given political system. The culprits of bribery are not just the recipients of bribes, but the facilitators and the givers of bribes. As long as a nation turns its back to the beneficiaries of bribes in whatever form, quality would be sacrificed, and development would be a haunting dream. We should start the war against corruption by declaring a war against bribery in cash or in kind.