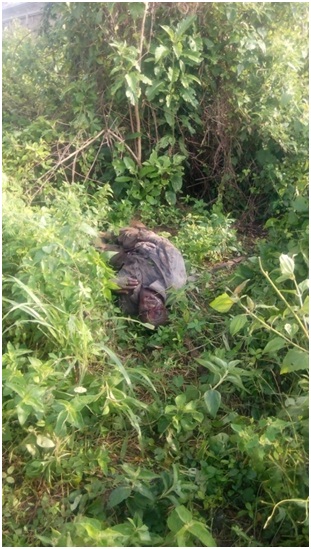 …as police nab man over killing of lover for rituals

The decomposed body of an unidentified man was on Tuesday found in a bush between Old Board and New Board road in Oda town, Akure, the Ondo State capital.
The corpse of the man was said to have been spotted by a resident of the area who was chasing a rabbit early in the morning in his farm and in the process sited the lifeless body.
The cause of the death of the man still remained a puzzle to residents of the area who thronged the bush to catch a glimpse of the decomposing body.
Our correspondent who visited the scene of the incident saw that the corpse was already decomposed with blood on the head of the deceased.
Also, found near the man’s body were a hat, water and human faeces.
It was further gathered that some residents had reported the case to the Regent of Oda Town, Oba Margaret Akosile, who contacted the police at the Ala quarters Division, Akure.
The police who visited the scene of the incident told The Hope Metro that the man’s body was not fresh and already decomposing.
Meanwhile, Osun State Police Command has arrested two suspected ritualists for allegedly killing and mutilating the body of an 18-year-old girl.
It will be recalled that The Hope Metro reported that one Kabiru Oyeduntan, 40, was last week arrested by the police for butchering lady, Toyin Adewale.
It was gathered that Toyin was lured to the house of one Kabiru Oyeduntan in the quarry area of Apomu in Isokan Local Government area of the state by her lover named Akin alias Clumsy where she was killed and her body mutilated for ritual purposes.
Akin was reported to have promised Kabiru N50,000 if he could help him kill Toyin.
According to a statement by the police spokesperson, SP Yemisi Opalola on Monday, two more suspects have been arrested in connection with the crime.
“Two more ritualists identified as Ramoni Rilwan, 27, of Oke Lode compound and Najeem Ayeloja, 30, of Oosa Fatunbi Compound have been arrested in connection with the ritual killing in Apomu, Osun State.
‘We have uncovered the real identity of the girl that was killed by these criminals. The identity of the victim was known through her 65-year-old parent, Ayinla Adewale.”
Opalola said police is still trailing the remaining suspects.