Defaulting Food Vendors to be sacked 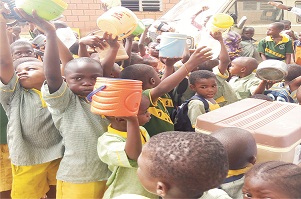 By Lola Omowaye & Bukola Olamona
|
Ondo State Government has warned that any food vendor who defaults in the free feeding programme for primary schools  will be made a scapegoat to serve as deterrent to others.

To this end,  all vendors,  who have been contracted to cook for the pupils  are urged to be diligent and desist from the habit of subletting such business to others or face the wrath of government.

Sounding this warning was the Special Adviser to the  Governor on Public and Intergovernmental Relations, Mrs Olubunmi Ademosu in a telephone interview with The Hope shortly after  an  inspection  tour of the   State Special Primary School, Oba-Ile.  Before the tour, there had been   allegation that the food vendor assigned to the school was defaulting in serving the pupils food daily.

Ademosu said the affected food vendor will be invited for questioning and if found wanting,  will be sanctioned, adding that the government has invested a lot of fund in the school feeding programme.

‘We are faced with challenges of people collecting money and they are not actually delivering. They now sublet this business out to other food vendors  and give them little money that is not enough to make proper meals for the kids. We have been going round and we have been picking them up. This  must  change, she affirmed.’

Speaking with The Hope,  Special Assistant to the Governor on School Feeding,  Mr Julius Sesan said the cook has performed below expectations,  adding that the register to track the programme  indicated that the cook did  not come regularly to serve the pupils.

He also complained that the School’s Head Mistress and staff in charge did not supervise the programme properly, and that the records were not up to date,  which he said contributed to the shortcoming recorded in the school.

Sesan said, although they were yet to confirm all the complaints  but that   the vendors should do their duties promptly.

Special Assistant to the Governor on Home Grown School Feeding, Mrs Victoria Akinlolu said the Vendor came late and  sometimes absent , and warned her to be responsive as government pays  two weeks ahead of school’s resumption.

Debunking the allegations, the food  vendor,  Mrs Folake Ajisafe said she comes regularly to serve the children, except when  money  to provide the food did  not  get to her, adding that  she is feedi  more than one hundred pupils.

It was also gathered during the inspection that any day a food vendor does not serve the pupils such cook would have to refund such money back to the coffers of the government.

All pupils are expected to be fed, including those  at the orphanage.

Speaking  with  The Hope  some of the pupils, Valour Wachi, Ibitoye Bernard and Katherine Ololo said the cook does not come regularly.