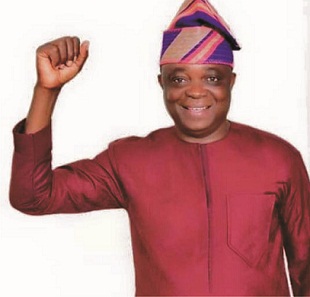 By Femi Atolagbe
|
The member representing Owo /Ose federal constituency in the National Assembly, Otunba Timehin Adelegbe has charged the Super Eagles of Nigeria  to go all out to beat the Syli nationale of Guinea in the match day two of the group B match in the ongoing African Cup of Nations in Egypt.

Adelegbe stated this during an interview with the Sporting Hope in Akure. He believed that Gernot Rohr tutor side will defeat the Guineans to continue their AFCON  campaign with 100 percent win.

He added that Eagles are good but they must be focused and play more as a team against the Syli nationale.

The legislator averred that with more seriousness and determination the Super Eagles will have an edge over the 1976 runner up.

He added further “that they should not be complacent because they have won the opening match against the low rated Burundi. The winning against Swallows didn’t mean they will automatically win the next match. But they should approach the game with all vigour and concentration, Eagles has the quality players that can get the job done for us”, he said.

Pressing further on his assessment of the starting line up of the Eagles in the opening game, said the line up wasn’t bad adding that he expects the coach to start the match with the same players in today’s match.

According to him, Daniel Akpeyi did well with a clean sheet in the opening match, the most important thing for the team is to be focus and make millions of Nigerians happy by thrash  the Syli nationale of Guinea.