Democracy of pains and deaths 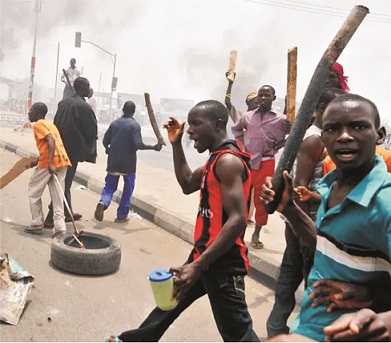 By Bisi Olominu
|
The ongoing 2019 general elections have been characterised by violence. From Abonema in Rivers State to Saki in Oyo State to Kogi and Nasarawa States, it was violence as the political parties tried to outsmart one another to gain power.

While the political gladiators are rejoicing for winning another mandate and various political parties celebrating their victories, this Nigerian man among several others, mourns the loss of his daughter, a mother of two.

Ibisaki Amachree, who worked as electoral officer in Abonema, Rivers State, was shot dead during the violence that occurred in the area last Saturday. Her heartbroken father identified as Daperi Trumperi Amachree took to the Facebook platform to mourn his daughter.

He wrote: “Here lies my beautiful daughter Ibisaki, a post graduate degree holder, full of cheer, love and kindness and mother of two. She was shot dead yesterday by a trigger happy and jittery soldier while she was on a national assignment with INEC.

“I have never arranged for the death of any youth. I hate violence and thuggery. If law enforcement agents have to kill an enemy, should it be my responsible and peaceful daughter?

It is well. Only God knows why it happened. He will surely repay the wicked.”

While the father of Ibisaki is licking his wound, a policeman in Ipokia, Ogun State, Sunday Idoko was shot dead by unknown gunmen while escorting election materials to the collation centre in Ilaro.

Report revealed that the incident happened on Sunday at 8.30pm while the police corporal was escorting the election sheet materials to the collation centre when he was attacked by hoodlums who gunned him down.

A teenager was killed in a polling unit in Ibadan. The teenager identified as Monsuru was reportedly killed by a notorious gang called One Million Boys during the last presidential election.

These are many incidence of violence that have thrown families into mourning just because of election in the land. In other clime or civilised society, election is good to behold but in Nigeria it is characterised with guns, charms, amulets, bombs and deaths.

In Rivers State, since 2011 to 2019, deaths enveloped the state  as lives were lost during elections. In the present presidential election in Rivers State, a corps member had already lost his life while many of them that participated in the election nearly missed death by the whisker.

A journalist in Ondo State, Ojo Oyewande said that,” Since it is about eating, it will always be war. May God grant the dead eternal rest”.

Another journalist in the state, Kamorudeen Ishola said,” In Nigeria, democracy is dividing us, bringing us pains and deaths”.

Election fiasco has plumbed the depth of anarchy in Nigeria. Despite warning from President Muhammadu Buhari for people not to snatch ballot boxes, he was dared by some to gain political advantage. Instead of the security personnel to have great day, it was the political thugs that dictated proceedings.

Media personality and blogger Toke Makinde while commenting on election violence and ballot snatching that occurred during last week presidential and National Assembly elections said,” Ballot box snatching and burning down election materials because you are dissatisfied that it is not going to favour you is weak. If you lose,lose with some dignity”.

She went on to say that the problem Nigeria is facing is greed, selfishness and lack of love which are all man-made.

“I even got tired of calling God into our matter as Nigerians, he has given us so much, blessed us so much. Our problem is man-made, selfishness, greed and lack of love”.

Violence has been on the increase in Rivers, while some states have also joined. The European Union Election Observer Team to the election confirmed the large size of violence that blighted the recent elections saying,” Problems are more pronounced in Rivers and Akwa Ibom States.

The reports confirmed 15 deaths while INEC said some of its ad-hoc staff were targeted in some states during the elections.

Speaking with The Hope, Pa Adeyemi Adesola condemned violence unleashed on the electorate by politicians and their political thugs during the elections. He said killing and shedding innocent souls during election in Nigeria would continue to draw the country back to perdition.

His words,” It is barbaric and demeaning for our politicians to engage in do or die politics. If the essence of politics is to serve, why then should someone point a gun to his or her fellow human being and gun such down.”

“I have told my children in universities that they would never serve during any election in this country. You train a child to university level and someone just kill such, such a parent has been killed”.