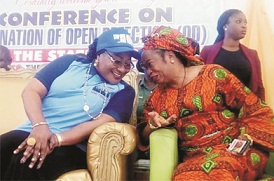 From Fisayo Akinduro, Osogbo
|
Residents of Osun state have been urged to desist from open defecation in order to safeguard their health and get rid of diseases.

The wife of the State Governor, Kafayat Oyetola made the call during a conference on the eradication of open defecation in Ikire on Tuesday.

She said open defecation is a major challenge which is borne out of an age-long practice of the people. “It is the practice of defecating in the open places such as fields, back of the houses, and every open place other than in toilets.”

The governor’s wife stressed that every time we step out to openly defecate, we are deliberately inviting water borne diseases such as diarrhea, cholera and typhoid to ravage.

Mrs Oyetola while condemning the act said another crucial consequence of open defecation is that the diseases arising from the practice could negatively affect the education of children by making children miss schools when they are sick.

She said Governor Oyetola’s administration has made healthcare one of the major pillars of its programmes by being committed to enhancing the health facilities in the State especially the primary health care facilities.

She enjoined mothers, especially the nursing ones to exclusively breastfeed newborns for the first six months.

She called on mothers to be at the forefront of this campaign to stop open defecation in order to guarantee the health of the communities and our state.