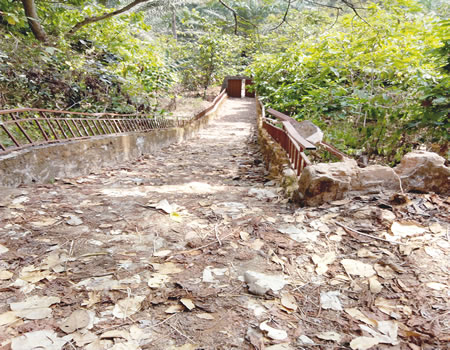 From Francis Akinnodi, Ondo
|
The Oluoke of Okeigbo, Oba Lawrence Oluwole Babajide has called on the Ondo State government to develop the Igbo Olodumare in Okeigbo to a tourist centre standard to generate revenue for the state.

He urged government at all levels to leverage on its unique culture and tourism products to generate income and create jobs especially at this time when the government has to look inward, instead of relying solely on the dwindling monthly allocation.

The monarch said the call is important at this time as the Federal Government’s has identified prospects of the creative industry, of which culture and tourism are integral parts, as a key sector to create jobs, wealth and as foreign exchange earner for the country as well as the comparative advantage and potentials endowed in Okeigbo kingdom.

According to him, ”It is common knowledge that all our local government areas in the state have unique products, festivals and outstanding tourism sites.

“I, therefore, wish to also encourage all the managers of culture and tourism at the state and local government levels to make the necessary efforts to develop these products and tourism sites in partnership with the private sector, in order to attract both domestic and international investors and tourists.

He said developed countries like China, Brazil, Egypt among others, considered culture and tourism as vital parts of their economic agenda to generate income and sustainable employment for their citizens.

Oba Babajide however appreciated Governor Oluwarotimi Akeredolu, SAN, for lifting Okeigbo kingdom out of labyrinth and set it on the path to greatness and abundant prosperity like other peer kingdoms.

Also, a community leader, Dr. Bolu Adeboye, praised the Governor for his leadership role in the promotion of peaceful co-existence in the state.

Adeboye, who described tourism as one of the key drivers of the diversification of the economy away from oil, urged government at all levels to provide the necessary infrastructure that will enable the country to fully harness its tourism potential.