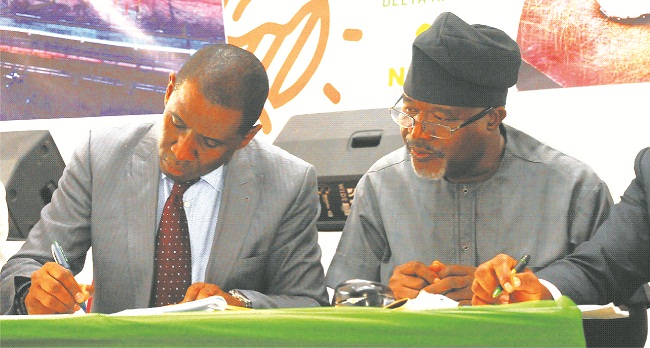 By Kayode Crown
|
Bitumen was discovered in Ondo State in 1904. It was something that could transform the country, but has been kept in the shelf for so long and abandoned.

Various governments have come and gone but the needed financially muscle to see to the extraction of the mineral for the derivable socio-economic benefit has been hard to find. Different administrations in the state have paid lip service to the exploration of the mineral deposit in Agbabu in Irele Local government area of Ondo State.

But the present government in Ondo State, in line with its first class determination to see that major industries are set up in the state to mop up the army of unemployed youths, has moved long standing mountains to put the state firmly on the path of successful bitumen exploration.

It has decided to take the bull by the horn, and has moved things beyond mere planning and mouthing of promises and we now have proof that the equipment to bring the products from beneath the earth have arrived in the country.

The Ondo Governor, Arakunrin Oluwarotimi Akeredolu, made this fact known at the convocation ceremony for graduating post graduate students of Federal University of Technology, Akure, last month and  added that the exploration of the huge bitumen deposit in the state would help to tackle unemployment and boost the economy of the state.

South-west Bitumen company, a company owned by one of the honourary awardees at the FUTA convocation, Engr. Akin Odumakinde, according to the governor, is at the forefront of the new bitumen drive in Ondo State and have now expended millions of dollars of its own money in the process.

Odumakinde hails from Ijare in Ifedore Local Government Area of the state, and through another of his companies, has been a major player in the local content initiative of the oil and gas industry in the country.

So for the exploration of the mineral, also known as asphalt, which is much sought after all over the world, we have a son of the soil at the driver’s seat, who has over the years gained competence from working in the oil exploration industry.

Bitumen finds use in the construction and maintenance of structures like highways, airport runways, car parks, tennis courts, dams, reservoir and pool lining, paints, newspaper ink production, side-walks, bridges, drilling fluid additives for the oil and gas industry, water proofing of roof, lubrication, rust and acid proof paints, fire proof roofing, water proofing of fabrics, use in paint and ink to increase weather resistance and permanence of the paint and ink, and the sealing of some alkaline batteries during manufacturing process, among others.

Available estimates reveal that the current level of the world usage of the product is over 100million barrels per year, at about $50 per barrel, and more than eighty percent of that as the binder for aggregate particles, which are sand, gravel, and crushed rock, to create asphalt concrete for road construction. Asphalt is widely used in making airport runways because of the durability and ease of repair.

Modern life with a heavy emphasis for road construction would be written differently without the use of bitumen on a widespread scale in the process.

This was part of the disclosures made during the FUTA convocation by the state Governor and Odumakinde, being a commitment of the Southwest Bitumen Company.

Civilisation has advanced to this stage because people put on their thinking caps and have taken the time, risk and courageous steps to explore new ideas and refine those that already exist to make life better for humanity. Through this, new technologies have been discovered and innovations made.

The exploration of new processes and inventions, applications and uses of the bitumen is the way to go and Ondo State in collaboration with South-west Bitumen Company is already moving in that direction with the plan to establish the bitumen research centres, to become an eye into the future. This is highly commendable.

With this, when it comes to this globally sought after product, Nigeria can shape the narrative and drive innovation in that mineral sub-sector.

What that means is that the Southwest bitumen companies is also focused on developing local manpower and give its work an intellectual grip through long-term research funding to be at the cutting edge of that field globally.

It is foolhardy to just sit here and seek to only use what people in other parts of the world are generating in innovations. Our universities can start living up to their names and create value for the society where they exist through such collaborations with private enterprises, which can provide the funding to drive research.

It’s being said times without number that Nigeria cannot develop beyond its investment in education, and hitherto the pressure has been applied on the government to do something in this regard.

However, with competing objectives for the relatively meagre public resources, the private sector cannot continue to fold its hands, rather should do the needful and contribute to research funding in Nigeria, as Southwest Bitumen company has promised to do to move things forward. We cannot wait for the government forever.

The world universities, where brains are being cultivated to incubate and explore new ideas to generate innovation in various fields, have been a centre for research linking to society development for many years.

However Nigeria seems not to be focused on that, fixating on foreign curricular rather than putting emphasis on things that are peculiar to us in this environment while not neglecting to play our part in the global scheme of things.

The move to establish the bitumen research centres is definitely a step in the right direction. We cannot continue to go cap in hand to other countries in the world for research innovations as if God has empowered others with brains while our own skull is full of foam.

The deposit of bitumen in Ondo State have been adjudged the second largest in the world after the one found in Canada. And it makes sense therefore for the state to be part of the global trade in the product.

And we can start from our country here where as it is now, Nigeria spends N300billion yearly to import the product.

And the exploration in the country would not just add to the financial bottom-line of Ondo State, creating thousands of jobs in the process, but has the potential to drive the cost of road construction down.

The Ondo State governor has said that it is scandalous for the country to spend such a huge amount on bitumen importation when the state has such a large deposit of the mineral, with available estimates putting the size at 42billion barrels, the processing of which would go a long way to boost the country’s foreign exchange.

We should no longer be an importer of the product but a exporter, in a major change from the status quo. It will transform the state, the country and even Africa, which already have a huge infrastructural deficit.

Nigeria has a huge road infrastructure deficit which trillions of naira needed to bridge the gap, which would be greatly reduced with bitumen exploration in Ondo State, being a major component of road construction costs. Bitumen would be locally sourced as against massive importation presently going on.

In July 18, 2017, Federal government awarded a mining licence to the Ondo State government, with the Governor using his political capital seeing that his political associate and now governor of Ekiti was then the Minister for Mining.

Minerals are in the exclusive list of the federal government, constitutionally defined as its prerogative, but seeing that industrialisation is at the front burner of the present Akeredolu-led administration in Ondo State, it has pulled all the stops to arrive where we are in bitumen exploration and it is being projected that by the first quarter of 2019, bitumen from Agbabu would start to be put to use in the paving of roads in Ondo State.

Dr Fayemi at the first investment summit held in Ondo state last year,  revealed at that the whole of Africa can be served by the bitumen reserve in the state and that the decision to grant the state licence to explore bitumen is part of federal government’s initiative to diversify the economy, boost foreign exchange and the general economic development of the state.

According to Fayemi: “Nigeria currently imports over 600,000 tonnes of asphalt per annum and the nation spends billions of naira on importation of asphalt every year. The naira is weak now because of much demand for dollar and less demand for naira and the poor export policy of the country.

“With bitumen being produced in Ondo State, federal government will ensure that none of its road contractors import asphalt and I am sure that many of the state governments will prefer to buy from Ondo State because it will definitely cheaper than imports from outside the country.”

The Ondo Governor, responded, saying that while attention over the years has been on oil and gas, his government is willing and ready to exploit its Bitumen reserves in a sustainable way particularly in the area of providing asphalt.

“Gone are the days that any government will be reliant on oil and gas alone. I am happy to inform you that in Ondo state, we are aggressively driving our non oil related industries.”

Engr Odumakinde said that every year Nigeria imports thousands of tonnes of bitumen at $500 per tonne, when in actual sense, there is bitumen deposit in Nigeria, a particularly Ondo State. This trend is bound to be reversed as bitumen exploration takes off.

In May, the CEO of Ondo State Investment Development and Investment Promotion Agency, ONDIPA, Mr Boye Oyewunmi, announced that private firms, which have been pre-qualified due to their technical and financial prowess, would partner with the Ondo State Bitumen Exploration and Exploitation Company.

42 billion barrels of reserves of the highest quality is the way the volume of the bitumen deposit in Ondo state has being described. But that data has been declared outdated by a Professor of applied Geology in Federal University of Technology Akure, Prof. Idowu Oduyemi, who while speaking to intending investors in Ondo bitumen, charged both the investors and the state government to undertake better research to arrive at a better estimate, otherwise investment decision would not be accurately made.

Reactions to the progress that the Ondo State government has made to see to bitumen exploration it the state have come from Ondo South Renaissance Movement, a socio-cultural group, who appreciated the governor for it, which is part of the many moves of the government to see to the reinvigoration of economic activities in the southern senatorial district of the state.

After hearing last month that the equipment for bitumen exploration have arrived in the country, the convener of the group, Isaac Olugbemi, in a statement said: “while we appreciate the commencement of the bitumen exploration by Ondo State government, it is important to caution the government over the possible neglect of the project which is one common attitude of governments in Nigeria.

“This time the government must also deploy its full machinery into making the exploration possible, which includes allowing experts to oversee the activities.”

The group demanded that the unemployed youths of the senatorial district must be considered first for the jobs on the bitumen exploration site.

It is a good development that the people of the senatorial district are already embracing the project and prodding the government on to see to its full fruition. And it is a reflection of the lethargy the people have developed over years when it comes to promises made to them by government, that they have demanded that it should not go back to sleep on the pace of bitumen development.