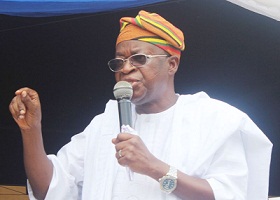 From Fisayo Akinduro, Osogbo
|
The Osun State Governor, Gboyega Oyetola has advocated religious tolerance, unity and peaceful co-existence among the citizens in order to bring about the desired growth and development to the state.

Oyetola made call at the weekend in Osogbo during the special prayer to commemorate the Islamic New Year Calendar, Hijrah 1441 AH.

The governor called on the residents to key into the pro-people social protection initiatives, policies and programmes of the administration, which he noted are painstakingly designed to engender peace and stability and as well make life abundant for the citizenry.

He implored them to imbibe the lessons of Hijrah by fleeing sinful and malfeasance practices for a new life and conduct that will add value to the state and the country at large.

While urging Muslims to use the occasion to pray for the progress of the state, economic prosperity, stability, peace and continuation of the good governance, Oyetola advised Muslims to use the new year for spiritual development.

He stressed that the peaceful co-existence among the religious groups in the state will further strengthen government resolve to ensure peaceful living.

He admonished all residents of the state, irrespective of faith, to continue to live together harmoniously and peacefully with religious tolerance and understanding.

In his welcome address, the president, Osun Muslim Community, Alhaji Mustafa Olawuyi, commended the Oyetola led-administration for being supportive to the development of Muslim Community in the state.

He said members of the Muslim Community remain committed to support the government in its bid to bring smiles to the faces of the citizens.

Olawuyi appealed to the state government, particularly members of the legislature to enact laws that would make teaching and learning of Yoruba Language in all schools across the state compulsory.