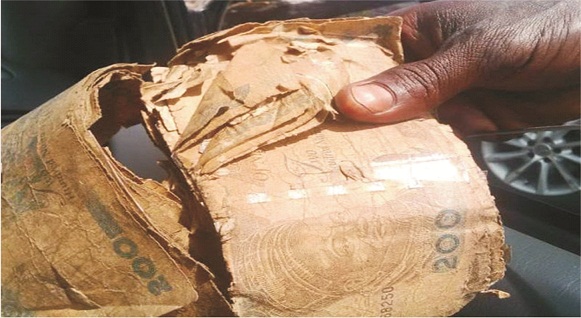 By Bisi Olominu
|
Some naira notes, Nigeria’s legal tender are eyesore, irritating and speak volume of how we keep our money in the country.

While other countries’ currency are good to behold, ours in Nigeria are irritating, The volume of dirty and mutilated naira notes in circulation is worrisome. It is obvious that the commercial banks, whose responsibility it is to mop up disused naira notes from circulation are unconcerned regardless of admonition by the Central Bank of Nigeria (CBN). The N100 and the N200 notes are the worse, while the N50 and N10 and N5 are almost fading off.

At the moment, there is hardly any decent note in circulation. Some of them are so ragged and smelly; such that no one is mindful of contacting diseases while touching them.

While it is unhealthy to hold the dirty naira notes in the palm, it is risky to keep them in the pocket or wallet because they are so limp that they shred at the slightest impacts. The ragged naira notes constitute health hazard given that they harbour pathogens that carry infectious diseases and respiratory disorders.

Dilapidated naira notes have equally constituted a problem in commerce and any other activity that involves the use of the currency.

Even bank tellers complain that they tangle in their cash registers, leaving them to do multiple recounting of cash. At various bank, the attendants are not finding it easy to use their counting machines to count the notes, while resulting to manual counting is almost difficult.

Apart from slowing down transaction time, refusing to accept the dirty and limp naira notes and the absence of better replacements have in many cases led to severe disagreements and even fights between the parties involved.

Much as our ragged naira notes constitute health hazards and unhelpful to commerce, they have also become a huge national embarrassment. No country that bothers about its image would mindlessly turn a blind eye as its currency notes become as trashy as what we have in the country.

The state of our naira notes testifies to a national decadence. Even among the polymer denominations of N10, N20 and N50, most of the features that made them legal tender have completely been effaced by wear.

Giving your children these notes to spend have become so difficult. Any torn note is unacceptable Our naira notes are shame of a country, the laws are there, but ineffective to administer.

A foreigner who arrives from the developed world where a smudge or the slightest of tears makes the currency unacceptable would nearly jump out of his skin if he encounters at the point of entry, the ragged, smelly things we cope with in this country as currency notes.

Much painful is that those who should rid the system of the dilapidated naira notes feel little or no concern about the embarrassment. Go to the supermarkets, filling stations and markets across the country, you will feel sorry for the state of our naira notes.

In a normal clime, naira notes are preserved and worshipped, but ours are tattered, smelling and an embarrassment to the nation. The nation’s apex bank, the Central Bank of Nigeria (CBN), has been told to withdraw dirty naira notes in circulation, especially N100 notes and print new ones, but it seems the call has not yielded any result. The bad notes are still very much in circulation.

Those who spoke to The Hope said the time is now for the CBN to withdrawal the dirty notes to prevent likely health hazard associated with reckless handling of these notes, and also to stop several fights,hatred, heated curses associated with spending the notes to buy things in the country.

A disagreement between a commercial motorcyclist and his passenger over a dirty naira Note, recently in a Lagos suburb turned bloody as irate youths beat the cyclist to a state of coma. It was learnt that a passenger, also identified as Miss Titilope Fatai gave the cyclist identified as Okon Akpan N500 but when Akpan gave his passenger her N300 balance, made up of N200 and N100 Notes, the lady returned the N100 Note and requested for replacement on the grounds that it was “too dirty”.

A heated argument ensued as the cyclist insisted he did not have a neater note to replace the ‘smelling’ one as demanded by his passenger. Consequently, the cyclist was beaten to a coma.

A trader at Mushin market in Lagos, Mrs. Chidinma Okonkwo, said: “The dirty Naira notes is a big problem for us as many customers refuse to collect dirty naira notes as ‘change’ from us. They will insist that we should change the notes or we should return their money so that they can go to another shop.”

She said she usually does not blame the customers as she could imagine how annoying it can be to pay for an item with clean naira note only to be given ‘change’ in dirty and torn note. She noted that the situation was getting out of hand as many traders now have a stockpile of dirty notes in their houses that they have not been able to dispose of.

“When we go to deposit money into our bank accounts, the banks usually reject the dirty notes on the grounds that when they return dirty notes to CBN for replacement, the apex bank imposes a charge on them,” she said.

Also speaking with The Hope in Akure, a market woman at Isikan Market, Mrs Mary Ojuolape berated banks for doling out such money. She expressed disappointment that such notes will still be in circulation when there is government in Nigeria.

“Anything goes in our dear country Nigeria. What we now spend as money is tattered money that is dirty, smelling and causing people to have diseases. It is a shame to spend such and those in authority are doing nothing to arrest the ugly trend.

“American government can’t allow such dastardly act to befall their currency notes, it would do something immediately, but here in Nigeria it is business as usual”.

An Okada rider, Nojeem Salau in his reaction, begged government and banks to do something quickly to save the country from this shame.

According to him, even banks give customers some of these denominations and when they complained , the exchanged even worse.

“Many have I rejected from my customers and even those collected but thorned in the process of putting it in my purse are at home now”. Cyril Ampka, an Abuja-based financial analyst, said the time for the CBN to print new naira notes is now as it has gotten to an embarrassing state

“The dirty notes we have in circulation, especially the lower denomination are becoming an embarrassment to the country.

This I why I said in an analysis I put in several newspapers in the country few months ago that there is no hiding place for the CBN.”

“The CBN had no choice now than to print new notes and withdraw the dirty notes from circulation”.

Mr. Adebayo Adeleke, an accountant, said there should be a law that should prohibit banks from giving customers bad or dirty naira notes.

“Any bank that gives his customers old and mutilated notes should be sanctioned by the CBN”, Adeleke said.