DISCOS: Is it time for recapitalization? 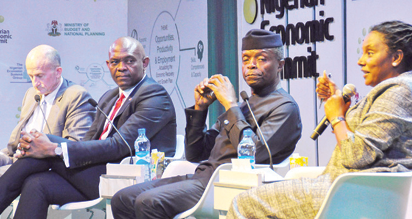 DISCOS: Is it time for recapitalization?

By Bisi Olominu
|
Nigerians are bitter with the state of electricity that has been in comatose in the country. Go to the South, North, Southeast and Southwest, the agony of Nigerians are still the same as the Discos giving the mandate to supply electricity to various homes, companies and other sectors have failed abysmally in their responsibilities.

The people in the country are paying for darkness, companies have folded up, many have relocated to neighbouring countries and those still on ground are on life support.

Nigerians are complaining bitterly, but it seems the federal government has been indifference to the crying of the masses.

The 11 DiScos despite providing darkness for the people are presently owing the Transmission  Company of Nigeria, TCN, about N270 billion, and this sum might be waived should the recapitalization of the DiScos be done. According to a memo sent to the former Minister of Power, Babatunde Fashola by TCN, the company stated of its resolved to inject $4.3 billion (about N1.556 trillion into DiScos’ networks, and increasing government representatives sitting on the DiScos’ board.

TCN said the DiScos lack revenue collection capacity and it solely relies on them for payment to finance transmission services. “The DiScos because of their general weak capacity are collectively emitting 30percent of the Market Operator, and have accumulated over N231 billion outstanding due to be paid to TCN as at March 2019”.

It also complained of rising voltage during the raining season where it alleged that the distribution networks are weak and with the massive loss of energy load due to tripping of several 33kilovolt at the slightest weather turbulence or rainful.

A similar memo was addressed to the former Minister in January 2019 which said that,” DiScos’ network is currently in a weak state and requires significant and urgent attention”.

The TCN Boss, Mr. Usman Gur Mohammed complained that no matter the amount of investment that the company put into transmission expansion, it cannot achieve the desired  results. He added that since there’s symbiosis relationship in the market, the non performance of any of the chain affects the performance of the other ends.

The Vice President, Prof. Yemi Osinbajo has also supported recapitalization of the DiScos in Nigeria saying that ” the performances of the electricity companies are significantly low”.

Osinbajo while speaking at the commissioning of the new Abeokuta 2x60MVA 132/33kilovolt substation and associated transmission lines built by the Niger Delta Power Holding Company, NDPHC, he regretted that despite the efforts of the Federal government at improving power generation in the country, the infrastructure of the DiSCos cannot deliver government’s promises of uninterrupted power supply.

Osinbajo stressed the urgent need for the recapitalization of DisCos to enable them build more infrastructure that would take the excess power generated for distribution.

His words:” In the past few years, resolving the power supply problem has been the top priority of the Federal government of Nigeria. But there is so much that still needs be done for us to get there”.

“Today, we have about 13,427 megawatts of installed capacity of about 8,332MW. The distribution capacity in the 11 DisCos are significantly low, hovering around 4,000MW on the average with the pick of about 4,500MW.

“Despite the availability of about 8,000MW generation and 7,000MW transmission capacity , the lack of DisCos infrastructure to absorb and deliver power to end users as largely restricted power supply to an average of about 4,000MW and even sometimes falling below 4,000MW.

“It is evident that despite all the efforts that have been put into trying to expand the national grid that the infrastructure on ground today cannot deliver on the government’s promises for industrial and domestic use.

” A substantial change of strategy is needed. In recapitalizing the DiScos, they have to simply come with more resources one way or the other. Part of the recapitalization process is the Siemens electrification programme”, he said.

Despite the 11 DisCos performing woefully, the Association of Nigerian Electricity Distributions, ANED, the companies umbrella body has kicked against the Federal government proposed imposition of recapitalization on the acquired assets.

The ANED Director of Research and Advocacy, Sunday Oduntan who doubles as the spokesman said that the investors were against imposition of mandatory recapitalization because the government has defaulted in fulfilling its part of the privatization agreement.

He also accused the government of failure to implement the cost reflective tariff system, which will enable the DiScos to recover cost of operation.

Beside, ANED decried the failure of the Federal government to provide a N100 billion subsidy allegedly promised after private investors took over about 18 power sector utilities on November 1 ,2013.

” To date, the government has not met the privatization transaction foundational requirements of providing N100 billion in subsidies; payment of MDA electricity obligations; ensuring that the DiScos have debt free financial books and implementing a cost reflective tariff “.

ANED lamented that the dearth of TCN funding has impeded the DiScos’ ability to distribute power and has led to crashes in power turbines requests for re-loading.

Speaking on the poor performance of the DiSCos in Nigeria, an electronics and cable seller in Akure, Sunday Mba said that the time has come for the federal government to do something  urgent about the zero performance of the DiSCos in Nigeria. According to him, Nigerians are suffering in silence and nothing seems to work in the country. He added that the sector which is the most important sector that should galvanize the countries economy  is in comatose.

His words :” The time has come for the federal government  to look into the activities of the DiSCos in the country with the intent of sanitizing companies that have been giving us darkness instead of light. Since the establishment of the electricity companies in Nigeria, citizens have been paying for doing nothing. Businesses that should yield revenues to the owners and even government have been at standstill since the DiScos have not been generating appreciable power in the country”.

“It is my candid opinion that when something is not working, government should look at other companies that can perform very well, even it should consider foreign companies to invest in the energy sector of the country. The present DiScos have reached their dead end, nothing good can come out of them. They are private companies, making money from the government, even government is spoon feeding them with money that has not been returned, yet they are still asking for more. Ordinary pre-paid metres they cannot give to their customers. To me personally, the business should be taken away from the DiScos.”