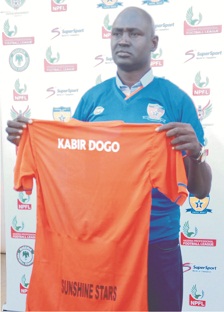 By Femi Atolagbe
|
Kabiru Suleiman Dogo, the newly appointed technical adviser of Sunshine Stars has expressed appreciation to the government and good people of Nasarawa State for their great support of his memorable stay at Nasarawa United.

Dogo spent five seasons with the Solid Miners before leaving Lafia to join Sunshine ahead of new NPFL season.

The former ABS FC’s coach guided the club to final of 2016 Federation (Aiteo) Cup and semifinals in the out gone season.

Dogo who disclosed that he made the right move by joining the Owena Waves said Nasarawa United and her good people will remain in his heart for their great support during his stay in Lafia.

“I like to first expressed my appreciation to the Almighty for this new adventure with Sunshine Stars and thank those that make it possible, my family and my manager, Daniel Eke, by God’s grace, I will work towards making them proud.

“I also want to thank the sports loving people of Nasarawa State, starting from His Excellency, Gov Tanko Almakura, Deputy Governor, Honorable Silas Agara, the Commissioner for Sports, Bamaiyi Anangba, the Emir of Lafia, Alhaji Mustapha Isah Agwai, all the entire members of Nasarawa United led by Barrister Isaac Danladi, players and technical crew for their love and support through my time with Nasarawa United, they will surely have a place in my heart forever,” he said.

Dogo who will be resuming to his new position at Sunshine Stars today (Monday) appealed for total support from every stakeholders of football in Ondo State to return the Owena Waves to its glory days.

“I know its a fresh challenge in a new environment, I believe we will achieve a lot of success but I can’t do it alone, that’s why I’m soliciting support from everyone to make it happen,” Dogo concluded.