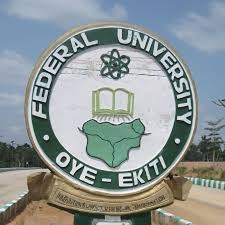 From Victor Akinkuolie, Ado-Ekiti
|
A Professor of Computer Aided Engineering  at the Federal University, Oye Ekiti, (FUOYE), Prof Samuel Adejuyigbe, has advocated for the introduction of more entrepreneurship courses into Nigerian universities curriculum.

Adejuyigbe spoke at the Federal Polytechnic, Ado Ekiti at the weekend while delivering a Convocation lecture entitled :  Exploring Artificial Intelligence, Robotics and Mechatronics World: The Place of Polytechnics in Entrepreneurial Educational Development in Nigeria’.

Adejuyigbe, a one time Head of Mechanical Engineering Department, Federal University, Akure (FUTA) expressed worry that the introduction of  entrepreneurial education in Nigerian higher institutions  has failed to resolve the problem of unemployment due to poor funding and slow investment in technology.

Adejuyigbe said poor financial commitment to the policy , has been slowing down the implementation of the entrepreneurship education curricular in many of the country’s citadels of learning.

He called on the Federal government’s agencies saddled with the responsibilities of funding education to pay attention to Entrepreneurship and Technological Education to afford students the opportunity of acquiring  the needed skills and vocations that can make them survive after their education.

The scholar craved for speedy introduction of Artificial Intelligence, Robotics and Mechatronics in the country’s curriculum to complement the entrepreneurial prowess of the citizens, by help to proffer solutions to tasks  that cannot be performed by human beings with their applications.

He said the country’s formulators of the education policy got it right by introducing Entrepreneurial education, insisting that the lofty dream  will be thwarted without adequate financial backing that will engender huge investments and exploits in technology.

He said the introduction of Artificial Intelligence and robotics innovations , have helped in mass production of commodities in advanced nations and had helped to energise the economy for meaningful development as obtainable in  China, Japan and other technologically advanced nations of the world.

Adejuyigbe called for synergy between technical schools and Polytehnics, saying this is the best way to develop the innovations of Artificial Intelligence, mechatronics and robotics.