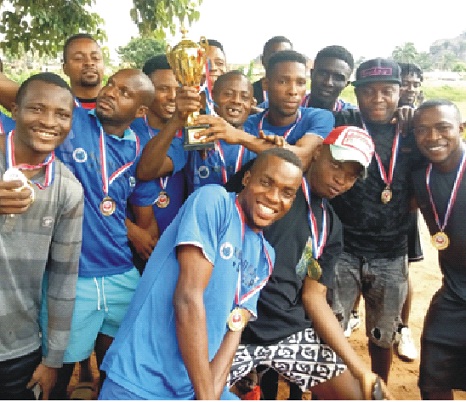 Moses Falade drew the first blood three minutes into the encounter after receiving a pass from Tope John before he sent Buffalos FC Goalkeeper wrong way for the opener.

Moment later, the highest goal scorer of the competition, Tope John doubled the lead  having benefited from a beautiful team move.

The second runner up of the competition, reacted with some flashes of the game but were contained by the Dragons’ defense.

Timilehin John made it three for his side at the stroke of half time with his outside the box sublime swivel shot.

The hostility continued at the restart of the encounter with both sides displaying football artistry to wet the fans appetite.

Substituted Taiwo Ajimuda sealed the victory for his side with his first touch of the ball to end the encounter 4-0 in favour of Buffalos FC.

The chairman organising committee of the competition, Mr Shalom Olaseeni while presenting the trophy to the winners said football is a very lucrative business which if massively invested into will help our economy.

He said Ijapo Ages Stars FC is blessed with talented players urging them to keep the momentum.

“We are ready to take the club to the next level of football, we want to contribute our quoters to the development of the round leather game at the grassroots and therefore take lots of talented  youths out of labour market by helping them to actualise their dream of becoming professional footballers”

One of the special guests at the event, Ex- International, Akin Olowookere appealed to football stakeholders to join hands with government at all levels to develop the game at the grassroots, saying government cannot do it alone.

Dragon FC captain, Ugochukwu Nnamdi Nzeakor expressed his joy over the success of his side and the competition at large. He charged grassroots footballers to be more  serious about the game , saying the game has a way of exposing their potentials for good.