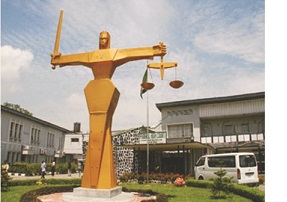 Fisayo Akinduro, Osogbo
|
A 22-year-old driver, Muraina Taiwo has been arraigned before an Osogbo Magistrates’ Court for alleged man-slaughter.

The accused who is a tipper driver committed the offence on November 16, 2019 at steel rolling area, Osogbo.

The accused person was arraigned on a two- count charge bothering on reckless driving and man-slaughter.

The offence committed contravened sections 18 and 27 of RTA cap 485 laws of Federal Republic  of Nigeria, 2003.

The accused person pleaded not guilty to the alleged offences.

The defence counsel, Mr Taiwo Awokunle prayed the court to grant the accused person bail in the most liberal terms.

The Magistrate,Taofeek Badmus granted the accused person bail in the sum of N500,000 with two sureties, affidavit of means, and three passport photographs.

The case was adjourned till January 17, 2020 for mention.