Drug abuse: A generation of mad people in the offing 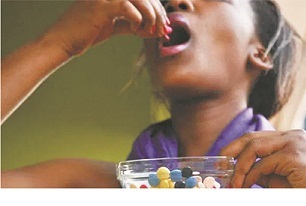 Drug abuse: A generation of mad people in the offing

By Bisi Olominu
|
Mad people are increasing in the country on daily basis. Go through the streets of Akure, Ondo City, Okitipupa to Ore, move to Ibadan and Lagos, Enugu to Kano, Kaduna to Nasarawa, Port Harcourt to Imo State, Nigeria is no doubt producing a generation of mad people due to unchecked drug abuse.

At the popular Imuagun Street in Akure to Igboyegun, young boys enjoyed rolls of Marijuana, poked the smoke and blew it into thin air to tell their arrival to the hall of fame of drug users. It was a scene not to behold, as small boys too have been introduced into the world of hard drugs.

A primary school boy, name not disclosed told The Hope that he was introduced to taking marijuana by his friends andhe has since enjoyed it.

At the Ayedun Primary School, Akure, young boys have turned the school to hard drugs joint and on daily basis, they exchange marijuana and other drugs, even test their prowes on who can smoke two wrappers of Marijuana simultaneously. Tunde Osewa (not real name) has been on hard drugs for many years. He was rusticated from University and ever since, he has not stopped taken the banned substance. He has gone haywire by taking hard substances.

Despite his frail look, he could not do without drugs everyday as he has become notable customer to the seller in Akure.

Asking why he loves smoking marijuana, he said: ” I smoke it because of frustration and neglect by members of my family. I have been taken off the streets several times and rehabilitated, but the aroma of hard drugs makes me to always go back to my vomit. I could not take my life  but find solace in marijuana for it makes me high to forget my sorrow.” Today Tunde is a shadow of himself and is a living corpse walking all about.

Nearly 15percent of the adult population in Nigeria, around 14.3 million out of the 200million population  of Nigeria are reported to take “considerable level” of psychoactive drug substances. It’s a rate much higher than the 2016 global average of 5.6 percent among adults.

The survey led by Nigeria’s National Bureau of Statistics, NBC, and the Centre for Research and Information on Substance Abuse with technical support from the United  Nation’s Office on Drugs and Crime, UNODC, and funding from the European Union showed that the highest levels of drug use was recorded among people aged between 25 to 39, with marijuana being the most widely used drug. Sedatives, herion,cocaine and the non medical use of prescription opioids also noted.

Despite efforts to prevent substance abuse and the laws that regulate drugs in Nigeria, the use,misused and abuse of drugs are on the rise in the country.

The lists of drugs that youths now take have expanded and now include such substances like Lipton soaked with gin, tramadol, codeine, dry pawpaw leaves, hypo in lacasera, tom tom in lacasera, rephnol gum, inhaling toilet gas, marijuana in regal gin among several others.

What do you think of the recent reported case of a Junior Secondary School student in Ohafia, Arochukwu Local Government of Abia State who was reported to have died after he allegedly took ten tablets of Tramadol. He purportedly took the tablets to enhance his performance during his school’s inter house sports competition where he was billed to compete. He could not compete in the sporting event as he died shortly after taking the drugs.

There have been cases of secondary school boys taken tramadol and raped their female counterparts to sign off completing their WAEC examination.

Speaking on this issue, a Guardian and Counsellor, Mrs Folashade Ajilo said that some parents have abdicated their responsibilities, neglected their children and never think for once checking on their wards. She said once some paid the school fees of their children, that was the end as they never look out for strange behaviour, strange changes and lukewarmness of the children and even sudden reaction of their children to issues.

According to her, ” As a parent you must study your children,  check on them, check their rooms and things to see what they are up to. Even, in their schools you must check them there, check their notebooks always to see if they are really going to school. If you see strange thing, strange behaviour, you must correct immediately and never wait till tomorrow. You must know the kinds of friends your children are moving with and when you suspect that something is amiss, let your children know and the reasons why they should not be with such friends.

“Majority of those insane in the streets or in psychiatric hospitals today is as a result of bad gangs who lured them just once to take hard drugs and they never regained their consciousness. It is harrowing seeing young and promising boys and girls   going insane in the streets and nothing is being done by those in government to rehabilitate them.

“Are those in government saying they don’t know where they are selling illicit drugs in the state? They know but will not act. All the dark spots in Akure are being used to sell drugs. You will see some young boys early in the morning smoking marijuana and they are not arrested. Some of the law enforcement agents are even taking the illicit drugs, then how would they checkmate the, little boys and girls taken hard drugs?

Mrs Ajilo said that until government do what is needful in the country, curtailing illicit drugs entering the country, young boys and girls will continue to have mental challenges.

A teacher, Sunday Adegbehingbe lamented the sorry state of the country as young boys are today taking illicit drugs. He said peer group influence are doing collateral damage to young boys as many joined bad gangs to enhance their status of big boys in secondary schools and in the streets. He posited that the cult wars we witnessed in some streets in the country was due to drug usage.

His words: “The vice has permitted to primary schools as these young boys are being lured to take illicit drugs or being a carrier of the drug from one place to another. It is in the process of being a carrier that they too will taste the drug and from there they will be addicted”.

” Government and parents have a lot to play to stem the ravaging scourge of mad people in our land. In the past it was not as this, but today you will feel sorry for this country as it toils with her future generation who are going mad on the streets as a result of using illicit drugs. How to tame the ravaging monster is very important and the earlier we find solution, the better for this country. To the parents, they should monitor their wards very well and know the friends they accompanying.”

To Mr. Tunde Obe, parents, government, religious leaders, families, educational institutions and other stakeholders must join hands together to tame the ravaging monster. Though children spend more time in schools, it is advisable for parents to keep the line of communication open with their children and teach them spirituality and responsibility in a positive home atmosphere.

“By listening to the needs of children and young people prevention can contribute to their safety, health and well being and enable them to realise their potentials”.