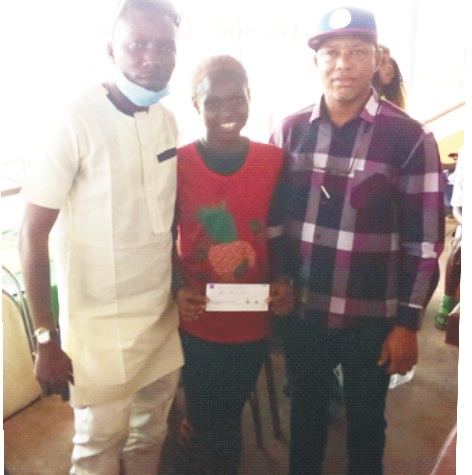 Dynamic Force have emerged winners of Michael Akintunde seven aside Hockey Tourney with 6points and superior goal difference over first runner up ,Sunshine Flickers which tally on same points.
The two days Hockey competition held at the state sports complex,Akure saw Ondo Stars slipped past Diamond Flickers on goal difference and came 3rd after both sides tally on 5 points while Divine Flickers sit comfortable at the bottom of the table with 4 points.
The General Manager of the Ondo State Sports Council, Mr Henry Omoyele Babatunde while presenting prizes to the winners enjoined the athletes to use the postponement of the National Sports Festival to train more to do the state proud at the national fiesta.
He added that they should ensure they aim high at any competition they found themselves, adding that there is no small contest and be guided by the spirit of sportsmanship.
He commended the sponsor of the competition for his practical demonstration of his love for sports.
He said “Micheal Akintunde is not only reporting sports he has really walk the talk, I call on other interested individuals with passion for sports development to join hands with the government to return the state to where they really belong when it come to sporting activities.”
The sponsor, Michael Akintunde thanked the General Manager for his moral support, saying this is little way to assist the state to prepare the athletes ahead of the forthcoming National Sports Festival.
He charge the athletes to learn from the competition and brace up for the task ahead.
The state’s Hockey Coach, Mark Oloruntola expressed satisfaction in the competition, saying it came at the right time for his players.
Cash prizes were presented to the 1st ,2nd and 3rd, while Bankole Adeshola won highest goal scorer, Isa Beauty emerged the Most Valuable Player, Esther Chukwu went home with the Best Defender and Youngest player of the competition goes to Ayodele Juwon.