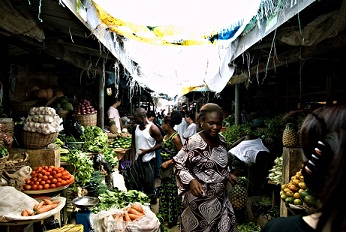 From Fisayo Akinduro, Osogbo
|
As part of efforts to boost revenue generation, the Osun state government has planned to reinvigorate the Ayegbaju International Modern market.

The Supervisor for Finance, Commerce, Industries and Cooperatives, Mr Bola Oyebamiji disclosed this during a meeting with stakeholders of the market in Osogbo.

Oyebamiji stated that the Oyetola administration is determined to make the market in Osogbo function optimally and serve the purpose for which it was established.

He explained that Governor Oyetola has directed that new strategies be adopted with a view to getting the market fully active and operational, noting that the market is seen as the future of the state in terms of boosting commercial activities in the entire state.

According to him, “Our masses-friendly governor is not too happy about how the Ayegbaju International Market in Osogbo is lying fallow without major commercial activities taking place in the facility.

“The governor is determined to make it work and functional and that’s why he has constituted this committee to see to the reinvigoration of the market because he believes the facility is the future of the state.

“We must all work together to see how we can bring the vision of building the market to reality for the benefit of the state and especially the coming generation. The market has the capacity to make Osun a major commercial hub in the country if we are determined and resilient to make it so”. Oyebamiji stated.

Also speaking at the meeting, the Supervisor for Budget and Economic Planning, Professor Olalekan Yinusa stated that the present administration in the state intends to do everything possible to take full control of the market which will enable the state have full advantage of the facility now and in the future.

Yinusa pointed out that if such a facility is well managed and made to be fully operational, the state will no doubt be ranked among it’s peers in terms of revenue generation and economic growth.

He said, “it’s a privilege to have such a facility in Osun and right at the center of the state capital Osogbo, as a state we should take full advantage of it to boost our economy.