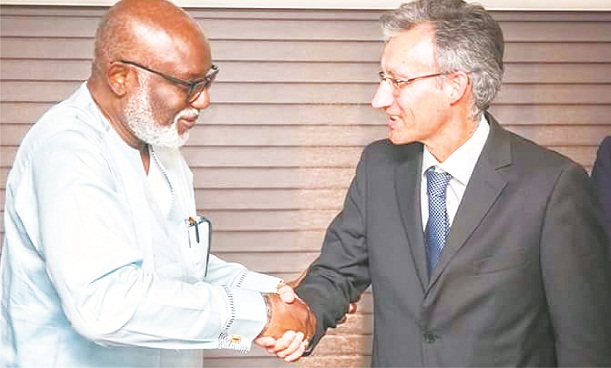 By Kayode Crown
|
It takes less energy to consume than to create, but if you don’t create enough there may not be enough for you to consume and that may land you in the pit of poverty.

This informs the need for Ondo State to rapidly change from having the government as the largest employer of labour in the state at over 40,000 workers, to bringing well managed industries into the state to bridge the employment gap.

You are as valuable as what you produce that others want to have. And that is the whole point of industrialisation, which is the development of industries in a place on a wide scale. And for the purpose of clarity, an industry is about economic activities geared towards the processing of raw materials and manufacture of goods in factories.

Ondo State boasted of some industries in times past, which have become moribund, but people look back with nostalgia at what they regard as the good old days, charging successive executive governments to look into them and revive them. But the cost benefit analysis of that line of action may make that line of action unjustifiable.

However, the State has a lot of things going for it with regards to making it a destination of choice for those who want to set up industries. We are one of the most peaceful states in the country and the weather condition is very conducive for any agriculture-based establishment. And the most important of all is the political will of the government, as the government has made it a priority to have many industries set up in the state, providing procedural ease and an incentivised atmosphere.

August last year, the Ondo State House of Assembly enacted a law to establish Ondo State Development and Investment Promotion Agency (ONDIPA), which is now serving as a one stop shop for all administrative needs for anyone who wants to interface with the government on setting up industries in the state.

Its stated goal is to build Ondo State into a hub of investment opportunities in West Africa, and it is set up for investment promotion and multilateral cooperation.

Led by its CEO, Mr Boye Oyewunmi, the agency states that it is committed to meet all corporate best practices to ensure seamless integration of potential investors, development partners and investments into the growth and development of Ondo State.

As it notes in its mission statement, ONDIPA is to facilitate, promote, manage, and support domestic investment, foreign direct investment, foreign portfolio investment and grant investments to help nurture new and foster existing industries for social and economic development in Ondo State. And its stated seven key areas include: investor and sector targeting/marketing, policy formulation and advocacy, promotion of tourism, business facilitation, support and after care, partnerships and sectoral corporation, multilateral and donor relations, and management of economic zones.

This is a clear sign to the world that the state is open for business. The agency is like a red carpet laid out for the intending business owners to set up their base in the state, as it welcomes investment from different industries.

Ondo state Governor Oluwarotimi Akeredolu has said that reviving dead industries is not in his agenda, instead committing himself wholeheartedly to have new industries set up, saying that a new glass industry will be established to replace the dead Oluwa Glass Industry.

He added that the new glass industry, which would have the capacity to employ not less than 10,000, would be set up with modern equipment, seeing that the ones at the Oluwa Glass are now obsolete.

He said, “there is a dire need to diversify our economy from oil dependence into agriculture, entrepreneurship and industrialisation in order to boost internally generated revenue.”

Speaking on his industrialisation drive in the state, Akeredolu said that the state would soon become the nerve centre of maritime business in West African sub region, owing to the development of the Port of Ondo, seeing that the state has the deepest and longest contiguous coastline.

While submitting a report on the proposed sea port to the government, an expert from Maritime Transport Business Solutions, Holand, Mr William Slendebrook, said that the success of the sea port, is hinged on the establishment of a free trade zone.

He said: “Both Ondo port and Ondo Free Trade Zone are necessary as a platform for local socio-economic development and economic diversification. We have a proper plan for the deep sea port. But we have to do proper land preparation. Ondo port cannot exist without the free trade zone.”

A free trade zone is defined by Wikipedia as a special economic zone, a geographical area where goods may be landed stored, handled, manufactured and reconfigured and re-exported under specific customs regulation and generally not subjected to custom duty. The primary purpose is to remove hindrances to trade caused by high traffic and complex customs regulations.

For a free trade zone company, benefits may include is tax holiday for some years on all taxes including federal, state and local government taxes, duty free importation, and 100percent reparation of capital profits and dividends.

There is exemption from all import and export licensing and all expatriate quotas, and 100 percent of the product manufactured can be sold to the Nigerian market with significantly low import duty paid on manufactured goods sold locally. With our population of about 180million, this makes economic sense to investors. Also, land is rent free for an agreed period.

According to the Nigeria Export Processing Zones Authority (NEPZA), Free trade zones are proven vehicles for driving economic development, and a country which has used the concept of free trade to leap frog development is China.

And such a zone has been established the southern senatorial district, near the proposed deep sea port will also be.

With the sea port, the state becomes extremely attractive for the setting up of industries because their international transport needs are sorted out near where they are, thereby cutting costs, and logistic needs.

In the nearest future when the sea port comes on board, the state may become a huge industrial landscape, with a booming economy to rival that of Lagos State. This is possible and definitely the vision that the Ondo state Government, led by Akeredolu, who has said that his administration is ready to start the deep sea port.

So, rather than looking back to what was, the government is looking the future and is charting a new course for the state through attracting people to set up their industries in the state, and a particular concept is expressed in the 1000-hectare Ore Industrial Park.

The governor has said that the Park would only be the tip of the iceberg when compared to the development projects being facilitated but his administration to not only open the state up but to also turn around its economy.

According to statement on the website dedicated to Ore Industrial Park, the managers, Hessman Industry Limited, said that their aim is to develop the park in a fiscally responsible manner that maximizes its economic benefit to the community through creation of meaningful jobs in conformance with established plans. It is promoted as an investment destination with unlimited opportunities, targeted at providing attractive conditions for building factories, logistic warehouses and other service facilities.

It stated that the most important investment advantage of the state is the fact that the state is the most peaceful among the fellow comity of states in the oil rich Niger delta region in Nigeria and that the investment friendly policies of the Ondo state government is responsible for the high rate of investors, donors and partners thronging the state to have a feel of the positive investment environment currently being experienced in the state.

The park is a public private partnership initiative between Ondo State government and Hessman Industry Limited, with 30MW independent power plant there designed to supply the industries with electricity, with the possibility of having it expanded to 120MW, and employing 80,000 people.

No industry can be expected to run without adequate power supply, the fact that there is endemic epileptic power supply in the nation is largely responsible for the reduction in the number of industries in the country as they relocate to others country or die out-rightly.

Available data from the Manufacturers Association of Nigeria showed that in 2016, close to 300 firms shut down, and industrial capacity utilisation was put at 20percent.

The organisation stated that more than half of surviving firms are classified as ailing which posed serious threat to the manufacturing sector.

Digging deep into the situation, it states that the business environment was plagued by epileptic power supply among other issues.

The cost of running generator makes industries uncompetitive in a global market, and anything short of low cost of energy would not do for a state like ours which wants to leap frog industrialisation development.

Also, having signed an MoU with seven companies in Linyi, Shandong, China,  a few months ago, four out of them are ready to be fully set up, with thousands of jobs created.

Linyi is a place in China which can become a model of what Ondo State can become. Its annual trade volume is put at $5billion dollars, with a GDP of about $46billion dollars.

The hub is set up near the Ore Industrial Park and to be managed by Klickconnect Networks International.

It is located along the Benin-Ore Expressway and currently hosts WeWood industries, a wood processing company, ASB Valiant, an energy company, ATC Globalwide, a logistic and freighting company, and Hessplant Packaging Industries.

The target year is 2025 to see to the full development of the Park, with clearly stated opportunities for off takers and investors in the following areas: Textile, export processing, Agro Allied Chemicals, Hotel and Guest House, Office Apartments, Solar Panels Assembly, food and Beverages etc.

Another opportunity for big industrial development that Ondo State is pushing is Bitumen exploration. As it stands, it has been reported that eleven private firms have shown interest to partner with the Ondo State Bitumen Exploration and Exploitation Company (BEECON) through the state development and investment agency (ONDIPA) to commence the exploration and exploitation of the abundant bitumen reserves in the state with Ondo State reputed to gave the second largest bitumen deposit in the world and the largest in Africa.

With bitumen being produced in Nigeria, the effect will be felt all across the nation as road construction should be at a reduced cost since, at long last, we would not have to import bitumen. The exploration of bitumen found in Agbabu, Irele local government, according to the state government, promises to provide 30,000 jobs.

The Ondo State Government said that the drive behind all these moves is reflective of its readiness to partner with local and foreign investors in different areas.

Examples of such areas include: mineral resources exploration, agriculture and industrialisation of the state towards creating jobs for the youths of the state, via the setting up of industrial and agriculture parks, for industries to grow and flourish for the benefit of both the investors and the people.

The governor said that his administration was committed to the rapid transformation of the state, hence would continue to partner genuine investors while stressing the importance of private sector investments to drive development across the sectors of the state.