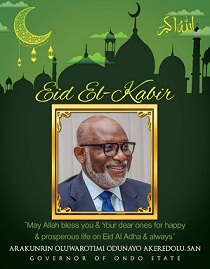 A statement issued by the Chief Press Secretary to the Governor, Mr Segun Ajiboye stated that governor Akeredolu considered the moment an auspicious one and an opportunity for rededication to service.

“Sharing this joyous period with all Muslims to the Governor, provides the veritable tool Nigerians collectively desire for a peaceful coexistence, tolerance as well as the needed communality with one another,” he added.

According to the governor, the true reflection of love, compassion, hardwork, patriotism, sacrifice and selflessness epitomised by the Holy Prophet Mohammed must be the compass of all Muslims in the State.

While urging all to imbibe the enviable virtues of the Holy Prophet, Akeredolu says the ceaseless prayers and intercessions of all Muslims are increasingly becoming desirable, especially for our selfless security agencies, in view of the precarious security challenges that have inadvertently, been imposed on the Nation.

The Chief Imam of Akure kingdom, Alhaji Abdulhakeem Yayi-Akorede, also implored government at all levels to find lasting solution to hunger and starvation ravaging the people of the country.

He gave the advice in his speech delivered during the Eid-El-Adha celebration held at Akure praying ground yesterday.

The cleric noted that the Nigeria as a country is blessed with lots of natural resources to better the lives of people but could not maximise the opportunity for its development.

He said governments both at the state and the federal levels should take the bull by the horns to phase out hunger in the country.

The Imam admonished the Muslim faithful at the well attended celebration, which had in attendance the Deji of Akure, Oba Aladetoyinbo Ogunlade Aladelusi, to join hands with government at all levels by resulting to prayer and hard work as an antidote to all challenges facing the country.

Yayi-Akorede who also used the occasion to mention some of the national issues in the country urged President Muhammadu Buhari to put more effort in tackling the ugly trend of kidnapping, banditry and terrorism by herdsmen and other crimes before it is too late.

While commending the president for the nomination of his cabinet members that will be working with him and which Akure indigene is among advised the minister designates that will be sworn in this month to give priority to nation’s interest in all their activities.

He appreciated the State Governor, Arakunrin Oluwarotimi Akeredolu for his numerous achievements in office and for the appointments of Akure indigenes both in political and civil services in the state.

Muslims across the six local government areas of Ondo North District as well converged at the various praying grounds in their respective communities on Sunday to observe this year’s Eidl Kabir prayers.

The Islamic adherents trooped out to the eid grounds as early as 8.00 am in their superlative attires to join other Muslims across the globe to take part in the once in a year celebration.

Speaking at the Old Benin/Iyere road Eid Ground, the Chief Imam of Owo, Sheikh Ahmed Aladesawe admonished the people to always imbibe the spirit of fear of God in whatever they do.

Sheikh Aladesawe pointed out that the problem facing the country at the moment was not unconnected with lack of fear of God as Nigerians are now fond of doing things in their own way without recourse to God’s intervention for a way  out.

In his own message the Chief Imam of Ijebu-Owo, Alhaji Aminu Jetemiodara implored the people to continue to pray for peace and tranquility to reign supreme in Owo, Ondo State and Nigeria in general.

Similarly the Chief Imam of Ikare Akoko, Sheikh Abbas Abubakar called on Nigerians to continue to pray for the  progress of the country.

Sheikh Abubakar also called on the leadership in the country to have the interest of the ordinary man heart as a way of giving a true meaning to governance.

Similarly he charged Nigerians across all walks of life to continue to pray for the country and those at the helms of affairs.

According to him, prayers remained the only antidote to ward off bad things.