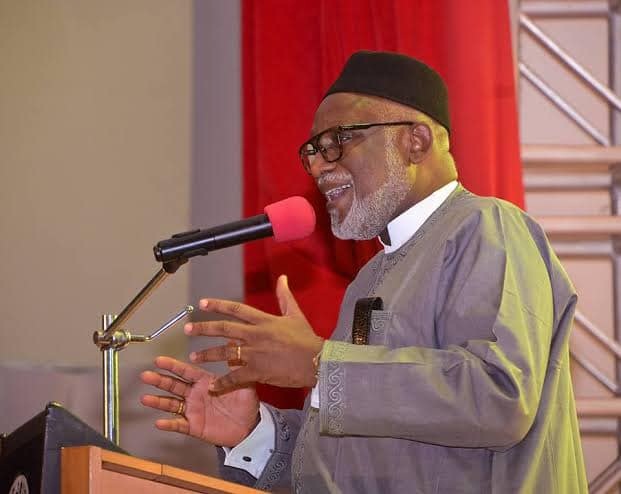 As muslim faithful defied the early rain to celebrate Eid-el- Kabir yesterday, notable Nigerians have enjoined that the lessons of the period must reflect in their attitude and Nigerians in general .
They also called on them to have the fear of God as entrenched in the tenets of Islam .
The Muslim faithful across the state had converged at their various Eid Praying Grounds to observe the two important rakats.
In his message on the occasion, the Ondo state Governor, Arakunrin Oluwarotimi Akeredolu, urged the Muslim faithful to pray for peace and harmony in the country.
Akeredolu also emphasised that the sprit and lessons of the season must reflect in the lives of the people and the nation.
According to the message signed by his Chief Press Secretary, Mr. Richard Olatunde, Akeredolu also reminded the Muslim faithful on the significance of sacrifice and love for one another and the country.
The Governor while congratulating them for witnessing this year’s celebration, equally charged them to celebrate with caution and observe all protocols for COVID-19 prevention including avoiding crowded gathering.
He advised them to always follow all the laid down safety protocols of COVID-19 pandemic so as to contain the spread of the deadly virus in the wake of the third wave.
Delivering his sermon at the Eid ground in Akure, the Chief Imam of Akure Kingdom, Alhaji Sheik Abdul-Akeem Yayi Akorede enjoined Muslims to celebrate within their limit, in view of the current economic situation in the country.
Akorede charged followers of Prophet Muhammed to imitate the virtues of Prophet Ibrahim, who submitted and believed in the only true divine God.
“We have four days to celebrate. If you cannot kill any animal today, you can still do so in the next three days. Do not do what is beyond you.
The Chief Imam also charged them to pray for peace and tranquility of Ondo state and in Nigeria.
According to him, with prayers, the problems bedevilling the country would be over.
Also speaking, the Grand Mufasir of Akure land, Sheik Moshood Raji Kehuyemi enjoined Muslims to follow the fotksteps of Prophet Ibrahim, keep to his faith and beliefs in the only Divine God
Sheil Kehuyemi advised Muslim Umah to be careful in celebration. “Do not do beyond your limit. Be moderate in celebration”.
In his sermon, Sheik Ahmad Aladesawe, Chief Imam of Owo said the rain was a good omen for the country as it was a sign that God has washed away the sins debaring the progress of the country.
Aladesawe charged Nigerians, both the led and the leaders to always obey the call of God to be righteous in all their daily affairs.
He called for love and sacrifice from the Muslims and adherents of other religions.
The Chairman, League of Imam and Alfas reminded those in position of authority to be mindful of what they do while in position.
According to him, it behoves on leaders to be honest and have the fear of God at heart.
The Chief imam of Ondo kingdom, Sheikh Abdulbasir Alimi in his sermon tasked Muslim faithful to remain close to Allah in whatever they are doing and continue to maintain a peaceful disposition, good neighbourliness at all times.
Alimi said the only way to Nigeria’s survival as a nation is for all governments in the land, irrespective of their political, ethnic or religious affiliations to initiate programmes that would contribute to the uplifting and also save the lives of the citizenry.
He further urged the people in the kingdom and the state to remain prayerful at all times so that there will be peace, unity and progress in the society.