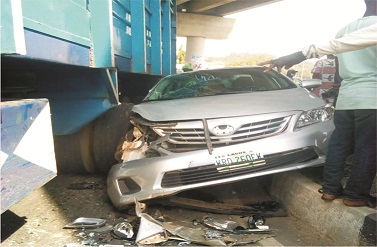 Victor Akinkuolie, Ado-Ekiti
|
As residents of Ado-Ekiti, the Ekiti State capital were savouring the joy of Eid-El- Maulud yesterday, an auto crash was recorded in Fajuyi area of the city.

The accident was said to have happened at about 2.30pm at Fajuyi interchange under the flyover.

Although no life was lost, the car was severely damaged by the impact of the accident.

The incident reportedly occurred after the traffic light had passed vehicles coming from Basiri end of Ado-Iyin Road.

Eyewitnesses pointed accusing fingers at the driver of the Toyota car whom they said miscalculated, while trying to overtake the trailer with the little space available by the left.

The accident was said to have caused a massive gridlock in the area, before  men of the Motor Traffic Division of the Okeesa Police Divisional Headquarters stormed the scene to restore normalcy.

The Hope Metro observed that the vehicles have since been evacuated from the accident scene.

The spokesman of the Ekiti State Sector Command of the Federal Road Safety Corps (FRSC), Mohammed Olowo, said the incident has not been reported to his office.

He promised to investigate and get back, “as soon as possible.”