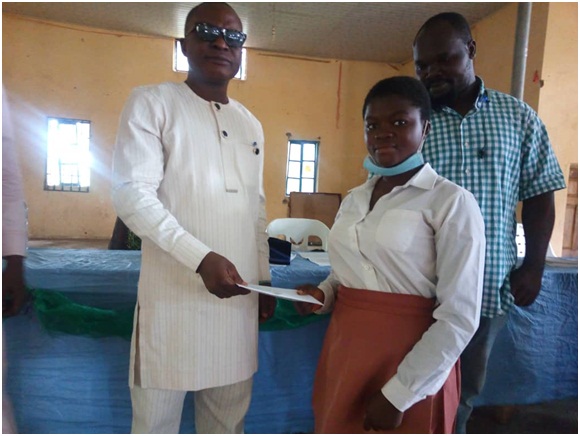 To wrap up the 2020/2021 academic session, the management of Ejioba High School, Obaile has awarded cash gifts to best students in English and mathematics.
Speaking at an event to mark the end of the session and prize giving day, Principal of the school, Dr Toyin Olobayo said the gesture was to reward excellence and encourage other students to aspire greater heights through hard work.
According to him:”when I got here I observed that most of the students do not have textbooks and this greatly affected them in their performances, so I thought of how to assist them, so that informed the programme of today”.
He said he called some old students of the school who gave their support which was used in the cash gifts so that they could purchase their textbooks for next term.
Best students in SS 1, SS 2, and SS 3 in English and Mathematics were rewarded with N20,000 each, while students in JSS 1, JSS 2, JSS 3 were given N10,000 each.
One of those who benefitted from the cash gift, the best student in SSS 3 in English Language, Adesina Adetoun said she was happy to be awarded as she was not expecting it. She said that all she did was to study hard.
Also, the best student in SSS 3 in Mathematics, Omotunlese Tosin said he studied hard which earned him the award, and thanked the management of the school for being thoughtful of rewarding them.
Meanwhile, the school has organised a sent forth party for retired and transferred members of staff .
The principal who said he was happy to be a teacher, posited that gone were the days when the reward of teachers is in heaven, but nowadays they get their reward while on earth.
Olobayo said there is need for teachers to celebrate each other while alive which was the reason some retiree and those that were transferred from the school and who have impacted on the students were celebrated.
“We are teachers and are training leaders of tomorrow, we are recognized everywhere because of the role we play in moulding future leaders” he said.
While enumerating some of his achievements since he assumed duty in the school in 2019 to include, completion of the school fence which he said as reduced the roaming around of the students, fixing 13 windows and 7 doors in classrooms that has no window and doors and construction of drainage for easy passage of waters.
He also added that the school came second in an essay competition organised by the state government, saying the school is moving higher.
In his speech, the representative of the Parents Teachers Association (PTA), Pastor Makinde Adesida gave kudos to the management of the school for celebrating their colleagues, saying it will go a long way to encourage other teachers to perform better.
He thanked those retiring and those on transfer for raising the standard of the school which he said was known as the” seat of Satan” before but now with their collective effort has turned it to a school that parents could be proud of.
He therefore advised the teachers in the school to see themselves as selfless servants as they are building future leaders, saying that they must not relent in doing what is good as their rewarder which is God himself will reward them.
Responding on behalf of those retiring and on transfer, Mrs Ogunwolere Abimbola,thanked the school management for recognising their labour while in the school and thereby calling on fellow teachers to do their work diligently as they will be rewarded by God and man as it is been done to some of them by the school.