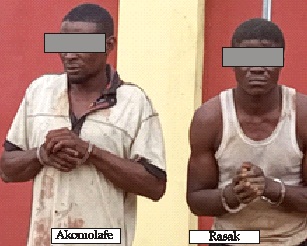 Operatives  of the Western Security Network codename Amotekun, Ekiti State Command, has confirmed the arrest of a 28-year-old man, Niyi Akomolafe, in connection with the stealing of electricity cable in Ado-Ekiti.

Similarly, the command also confirmed the arrest of a 31-year-old  Basiru Rasak, an ex-convict ,for allegedly stealing goat in Ijan-Ekiti, Gbonyin local government area of the state.

Parading the two suspects before newsmen at the office of the Corps in Ado-Ekiti, the Commandant, Brigadier Joe Komolafe, said that one of the suspects who was recently released from prison had escaped with the handcuff of the Corps shortly after he was apprehended in Ijan-Ekiti. was later arrested at a hideout in Ado-Ekiti, along other accomplices .

Akomolafe said the ex-convict had participated in many robbery incidents in the state, including the recent burglary of a popular Event Centre  in Ado-Ekiti.

Speaking on the suspected cable vandal, the Amotekun boss said the suspect had been on the wanted list of the Corps for sometime until he was apprehended by the operatives in Agric-Olopa area of Ado-Ekiti.

The suspect, he stated had caused several damage to electrical poles and cables in Ado-Ekiti, throwing the entire community into total darkness for days.  He said he would soon be prosecuted in  court as soon as investigation is completed on the matter.

The Amotekun helmsman urged members of the society not to hesitate in providing relevant information to men of the corps and always report any strange movements within their environments to the security agencies.