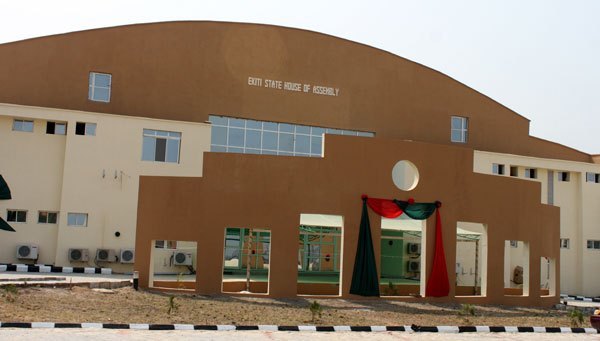 From Victor Akinkuolie , Ado-Ekiti
|
The Ekiti State House of Assembly on Tuesday witnessed a rowdy session following the suspension of the former Deputy Speaker and member of the Peoples Democratic Party(PDP) in the house, Mr Segun Adewumi.

Adewumi who represents Ekiti West Constituency I was suspended from plenary for six weeks by the speaker for alleged legislative misconduct during a plenary session.

The suspension of the the former Deputy Speaker , was attributed to undue interruption of the Speaker, Mr Adeniran Alagbada, while presiding over the House at the plenary on Tuesday.

It was gathered that altercation between the two high profile members of the legislative arm was said to have ensued during the plenary, all efforts made by other members to calm the former Deputy Speaker down proved  abortive.

The move  made the Speaker, Mr Adeniran Alagbada to exercise his powers and suspended the former Deputy Speaker in accordance with Section 17 of the house, standing order.

According to the Speaker, the former Deputy Speaker during the period of suspension will be prevented from participating in any plenary session, but could only involve in off- plenary activities of the house.

“I am still the presiding officer of this house and it constitutes an infraction for any member to interrupt me when I preside, except you have an observation to make.

Other lawmakers in their submissions agreed with the action, saying the speaker didn’t violate the constitution and standing order in meting out the punitive measure on Adewumi.

After the pronouncement, the lawmaker was said to have been ushered out of the hallowed chambers by the sergeant-at-arm.

Discussing other issues of public importance after the initial snag , a bill for a law to repeal Ekiti state official logo amendment law number 28 of 2014 and to re-enact Ekiti state government official logo law 2011 was passed by the Assembly.

Also, the Ekiti state development and investment promotion Agency Bill 2019 also passed through the first reading and committed to another legislative day for further legislative processes.

However, the screening and confirmation of some political appointees at the House fixed for today was shifted on the request of the Executive.