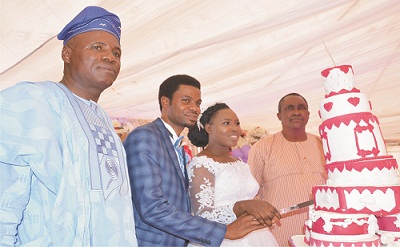 Ekiti State Commissioner for Lands and Urban Development, Mr Febisola Adewale recently gave out his daughter, Ayobami Blessing out in marriage to Abiodun Esan in a grandstyle .

Delivering his sermon at the solemnization ceremony ,Ven. Abel Ayodele of  St Peter’s Anglican Church, Emure-Ekiti charged the couple to put their home foundation on the Lord because it is God alone who can make marriage  succeed.

He enjoined the couple to see themselves as close  friends who must always do everything together and must not divulge any of their information to anybody including their parents.

Addressing the couple and others at the wedding reception,  chairman of the occasion , Mr Michael Awopetu enjoined the couple to emulate the virtues of their parents whom he said he had known for a long time .

The father of the bride, Mr Febisola Adewale who could not  hide his joy gave all the glory to God  and charged  the couple to be each other’s best  friend.

Speaking with The Hope, the couple appreciated all for their support and prayers.