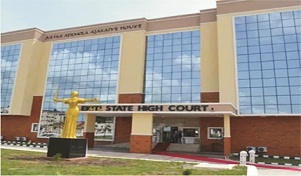 From Victor Akinkuolie, Ado-Ekiti
|
Apparently, in a move to bring justice closer to the people and tackle the menace of cross border crime,  the Ekiti State Judiciary has inaugurated a new Chief Magistrates’ Court in Ogotun Ekiti, Ekiti Southwest Local Government Area of the state.

Speaking during the inauguration of the new court, the Chief Judge of Ekiti State, Justice Ayodeji Daramola, described the project as “another fulfillment of the policy of the Dr. Kayode Fayemi-led  administration in bringing justice nearer to the people, especially those at the grassroot. “

Daramola, who described Ogotun Ekiti where the court was sited as a border town between Ekiti and Osun states, noted that the location  was strategic to tackling the incidence of rampant cross border crimes in the area.

The Chief Judge explained that the establishment of the court would serve as a “strategic warning signal” to criminals both within and outside the border that the days of reckoning were at hand.

Daramola, who expressed  joy over the commissioning of the court in the area,  said the number of Chief Magistrates’ Courts in the state has increased  to 22.

In his  remarks at the event,  the Ologotun of Ogotun -Ekiti, Oba Samuel Oyebade, expressed happiness during the inauguration of the new court in his domain.

The monarch noted that the court would save litigants the stress of going to the state capital and other nearby towns to seek justice.

Oba Oyebade added that the opportunity to access justice would help his subjects sought  redress in a legitimate way rather than resort to self-help.

While pointing out that he was not advocating that every dispute must end in court, the monarch  stressed that Alternative Dispute Resolution (ADR)  mechanism should also be encouraged.