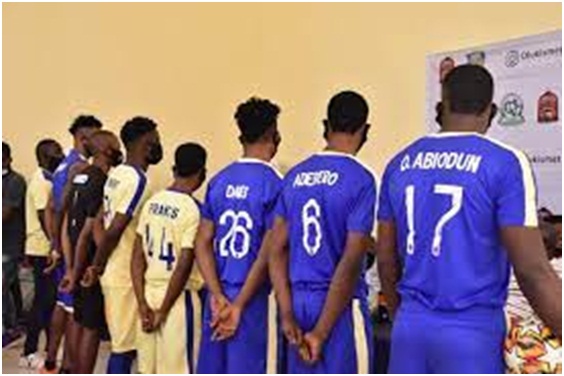 The Ekiti State Football Association has sanctioned Olukismet Football Club of Ikere Ekiti for unruly behavior and walking out of the AITEO Cup semi-final match between the club and Ekiti United FC.
In a letter signed by Ekiti FA Acting Secretary, Mr. Pelumi Abiara, the FA announced the suspension of the Ikere Ekiti based club from all football activities in the state.
It also ordered Olukismet FC to pay a fine of one hundred thousand naira, (N100, 000.00) while the head coach of the team, Deji Atobaje be suspended from football related matters in the state and to pay a fine of fifty thousand naira (N50, 000.00)
Furthermore, the football ruling body in Ekiti State also announced the expulsion of Olukismet FC from BAFEM CUP 2021.
Recalled that last Sunday, the 13th of June, 2021, Coach Deji Atobaje asked his players to abandon their FA Cup semi-final match against Ekiti United at the Oluyemi Kayode Stadium, Ado Ekiti, following what they termed as a wrong call from the centre referee for awarding a penalty against the team in the 44th minute.