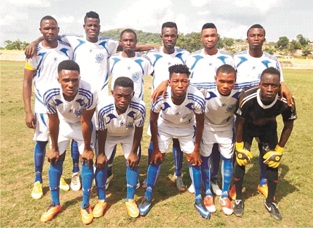 By Femi Atolagbe
|
Ahead of the maiden Bet9ja Ekiti Football League, Moyero FC  players are set to sign  contract papers with the club, says the chairman of the club, Mr Lanre Moyero.

The Chairman said the contract papers which will be signed on Friday May 17,2019 will hold at a ceremony slated for Solton Hotels in Ijapo Estate, Akure.

According to him the target for the team as usual is to play attractive football and produce talents that will be marketable abroad especially now that the club has signed new deals with their foreign partners.

The Contracts will afford the players the opportunities to get prospectus for development in their  careers as the team will be preparing to play in one of the national leagues at the next available opportunity.

The maiden Bet9ja Ekiti Football League will kick off with the preliminary stage on May 20th,2019 at Oluyemi Kayode stadium in Ado-Ekiti. 50 teams including Moyero FC will battle for honors in the competition which will also serve as a route to the national division three playoffs.

Meanwhile the team have stepped up their preparation with a series of build-up matches which has taken the team on a tour of some states in the Southwest.

After embarking on an off season activities Moyero FC reconvened with a screening of new  players that  represented the team at this year’s FA Cup in Ekiti State where they were edged out via a penalty shoot-out. The team has since returned to their Ijapo base to take a proper shape after registering for the bet9ja Ekiti football league.