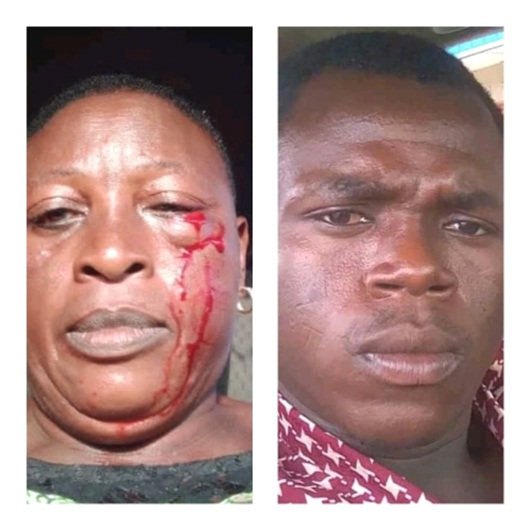 A chieftain of the People’s Democratic Party (PDP) in Ekiti was on Thursday attacked during the party’s ward meeting which resulted to a bloody clash in Ado-Ekiti, the capital of Ekiti State.
During the clash that lasted for about 30 minutes, a chieftain of the party in the area, Mrs Bola Owolabi, was said to have been hospitalized following a face injury she sustained from an attack from a fellow party member.
According to a source close to the police in Okesa divisional police station, members of the party in ward 9 Ado Ekiti, were said to have gathered at a spot for their weekly meeting, during which a hot argument ensued resulting into fracas.
It was learnt that during the fracas, Mrs Owolabi was allegedly attacked and injured by one Tosin Adebayo, an aide to former Ado Ekiti Local Government Chairman, Ayodeji Ogunsakin.
The victim, who is the PDP women leader for Ado Ekiti Ward 9, was reported to have lost much blood as from the injury he sustained on her left eye.
A party source who was at the meeting disclosed that Adebayo smashed the face of the women leader with wooden turning stick known locally as “omo orogun” during the meeting.
It was gathered that Adebayo is supporting the governorship ambition of Chief Bisi Kolawole, who is the preferred candidate of former Governor Ayodele Fayose, while Owolabi is supporting the ambition of former Deputy Governor, Prof. Olusola Eleka.
Former local government chairman, Ogunsakin, Adebayo’s direct boss, is the Director of Administration and Strategy of Bisi Kolawole Campaign Organisation and he is also from Ward 9 where the incident happened.
The case has been reported at the Okesa Police Station and the state office of the Federation of International Women Lawyers (FIDA) for investigation.
Attempt to speak with the women leader on Thursday was not successful as she was said to be responding to treatment and not in any mood to speak with our reporter.
A party member who craved anonymity said Adebayo attacked Owolabi for saying that she was surprised at his appearance at the ward meeting at a time he was supposed to be mourning his late sister who died from injuries sustained in a motorcycle crash.
However, another party member, who said the women leader’s remarks were not enough for her to suffer brutality from Adebayo, revealed that the attack stemmed from internal division in the party over the aspirant to support for the governorship nomination.
“The attack on the woman emanated from her support for Eleka, which Tosin (Adebayo) is not comfortable with because he and Ogunsakin are in support of Bisi K (Kolawole).