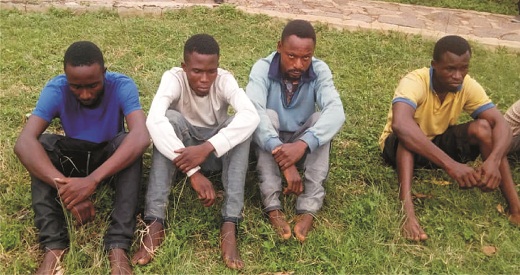 Babalola was alleged to have killed one man identified as Soji and  a lady, Adeola Adebayo, including one Tope Gana, at different locations in 2018. He was said to have fled and had since been at large.

The Police Commissioner, Mr. Asuquo Amba, who paraded the suspect alongside others in Ado Ekiti on Monday, explained  that on May 28, 2019 at about 10pm, the suspect, who confessed to be a member of the  supreme “Eiye” confraternity group was arrested in Ado Ekiti by men of the Special Anti Robbery Squad, after a tip-off from the public.

Amba said, “The suspect was alleged to have been involved in the killing of one Soji ‘m’ at Orita Blessing area, Oke-ila Ado Ekiti sometimes in December, 2018 and Tope Gana at Atikankan area, Ado Ekiti in January, 2019.

“The suspect also belongs to the group of armed men who shot at one Adeola Adebayo, at Yahooze barbing shop, Oke-Ila Ado Ekiti in 2018”.

Amba added that on May 2, 2019, his officers and men arrested one Samuel Omotoyinbo, a suspected notorious armed robber, after being tracked to the residence of one Peter Ajewole  at Ilesa, Osun state.

The police CP said, “On arrival at the scene, operatives of the Command arrested one Peter  Ajewole, while Samuel  Omotoyinbo escaped.

“The arrested suspect led the Command operatives to Iyin Ekiti where a locally made single barrel gun; one of the guns they were  using to commit armed robbery was recovered. Investigation revealed that the suspects had committed series of armed robberies in Ekiti State and its environs. Investigation is still in progress”.

Amba revealed that the police also arrested one Theddeaus Diala after he and his gang members trailed one Gabriel Fasanmi from United Bank for Africa (UBA) in Ado Ekiti, where he went to collect a N2million.

The CP said Fasanmi alerted the police which led to the arrest of the suspect.

“Upon investigation, the arrested suspect allegedly  confessed that he and two other members of the group  Eze Ikechukwu and Okechukwu,  presently at large wanted to rob Gabriel Fasanmi.

“Investigation was intensified and another member of the gang, Eze Ikechukwu was arrested and both confessed that they had robbed in about ten places within Ado metropolis including Akure, Ondo state and Osogbo, Osun state respectively.

Their victims in Ado Ekiti include, Gabriel Fasanmi and Esan Abiodun,”he said.

Amba stated that exhibits recovered from the suspects include one master key which they were using to force open vehicles of their victims and one Toyota Camry car with number plate RRT 09NZ, suspected to be stolen.

He said the suspects further confessed that they were formerly robbing in Ghana before coming to Nigeria and that their group is made up of nine men who are presently at large.

The CP disclosed that all the suspects will be charged to court after the conclusion of investigations.