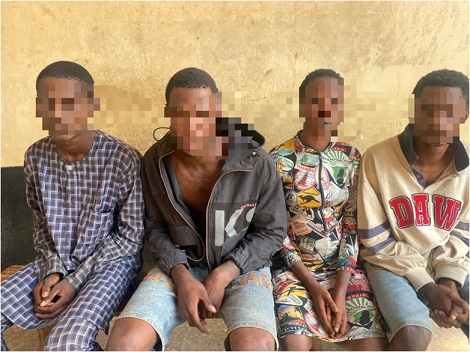 Detectives of the Ekiti State Police Command have paraded four persons in connection with the case of car theft, robbery and conspiracy.

The suspects who have been terrorising Ekiti State for sometimes were nabbed in far away Lagos by the Anti-Vehicle Theft Section (AVTS) attached to the command and brought back to Ekiti State.

According to the Police Public Relations Officer (PPRO) of the command, Mr Sunday Abutu, the suspects robbed a victim of his Mini Suzuki bus and one Itel phone along Aramọkọ-Ekiti, in Ekiti West local government area of the State and escaped to Lagos State, before they were apprehended by the police and brought back to Ekiti State.

He said during investigation, the itel phone  taken away was recovered while effort is ongoing to arrest other members of the syndicate and recover the Mini Bus hijacked from the victim.

The Police spokesperson said the suspects would be arraigned as soon as investigation is concluded.