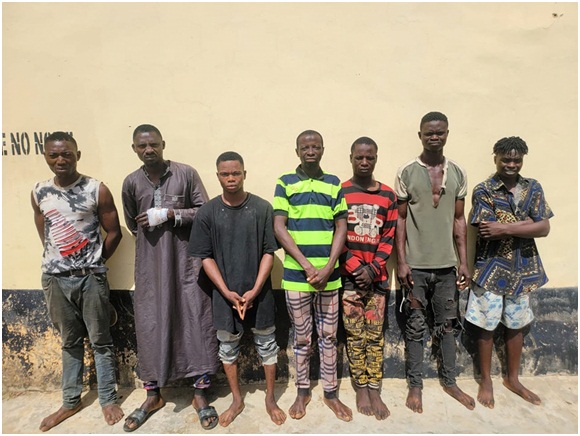 Operatives of the Ekiti State Police Command has confirmed the arrest of seven members of two cult groups, known as Black Axe and Eiye confraternity.

According to Abutu, on the fateful day, the command had received credible intelligence information that two rival cult groups Black Axe and EIYE secret cults, were on rampage in Aramoko-Ekiti, Ekiti West local government area of the state.

The PPRO said upon the receipt of the information, the operatives of the Command swooped on the scene and arrested one Olajide Marvelous, 24, Sunday Kolawole , 20 and Olajide Samuel, 25.

Others are; Jamiu Olalekan, 24, Sunday David, 18, Idowu Olarenwaju, 25 and Okeke Dada , 24, while others took to their heels and escaped arrest.

The police spokesperson said Investigation revealed that the two cult groups were fighting for supremacy and have been terrorizing innocent citizens and causing nuisance in Aramoko-Ekiti.

He said offensive weapons, such as guns, knives, charms and other dangerous items were recovered from them while effort is ongoing for the possible arrest of the fleeing suspects.

Abutu said all the suspects would be arraigned in court as soon as investigation on the matter is concluded.