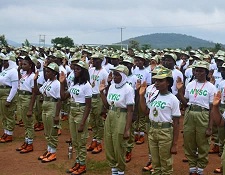 Victor Akinkuolie, Ado-Ekiti
|
Ekiti State Government has  said that plans are underway to reward Corps members who perform brillantly during the one year compulsory service.

The Governor of the state,  Dr. Kayode Fayemi, gave the assurance while addressing Corps members at the closing ceremony of the 2019 NYSC Batch B stream II orientation course at the Ise/Orun/Emure Orientation Camp in the state.

He assured them that his administration will reward Corps members for all Community Development Services rendered in the state during the service year.

Fayemi represented by his Deputy, Otunba Bisi Egbeyemi, advised the corps members to exhibit self-discipline, and be ready to render meaningful, patriotic and selfless services in their places of primary assignment.

The Governor charged the corps members to support the execution of various government policies and programmes designed to alleviate the plight of the masses at the grassroots.

He further charged the corps members to get involved in activities that would promote and justify the relevance of the NYSC Scheme in the state.

He stressed the need for corps members to always support government’s plans at various levels of governance towards improving the standard of living of the masses.

Fayemi explained that the relevance of the NYSC Scheme towards building a united, peaceful and egalitarian society cannot be over-emphasised, adding that it has promoted the mobility of skilled labour and national development.

Fayemi, who commended the efforts of the serving and past corps members in the areas of Education, Health Care Delivery Services, Road Safety, Agriculture, drug law enforcement, fight against the scourge of HIV/AIDS and corruption in the state, revealed that outstanding corps members would be rewarded with State Honour Awards.

The Governor, while admonishing the corps members, to shun negative tendencies like cultism, political thuggery, drug peddling, human trafficking, kidnapping among others, emphasized the need for them to avoid frivolous journeys in the course of their service to the nation.

Earlier, the Ekiti State Coordinator of NYSC, Mrs Emmanuella Okpongete revealed that the 21 days orientation course featured activities geared towards inculcating the ethos of nation building in the corps members.

Okpongete appealed to employers of Corps members to prioritize their welfare by providing modest accommodation and transport allowances for them.

She noted that effective engagement of corps members by their employers would help in curbing incessant journey and truancy among them.

Okpongete who commended the support of the administration of Fayemi,  in making the camp an ideal one for course participants, appealed for the construction of a multi-purpose hall and new hostels that would ease the burden of accommodation for corps members.

She charged the corps members to be agents of development and positive change in their host communities.