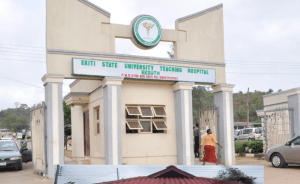 From Vic tor Akinkuolie,  Ado-Ekiti
|
As part of the move towards repositioning tertiary education in Ekiti State, the Governor, Dr. Kayode Fayemi, has set up an 11-man Visitation Panel for Ekiti State University, Ado-Ekiti, (EKSU).

A release from the office of the Chief Press Secretary to the Governor, Mr. Yinka Oyebode, said the setting  the  visitation panel was contained in an Executive Order 003 recently signed by the Governor.

Others are a renowned  University Don, Prof. Chinedu Mafiana, Dr. (Mrs) Modupe Ajayi, Dr. Hakeem Bakare, while Prof. Bode Asubiojo and Mr. Jide Akinleye will serve as the Chairman and Secretary to the panel respectively.

The  term of reference of the panel according to the CPS includes, inquiry into the level of implementation of the white paper on the last Visitation Panel Report in 2007, evaluating the leadership quality of the university in terms of the roles of the Governing Council, the Vice-Chancellor and other Principal Officers.

The panel were also empowered to examine the financial management of the university including Statutory Allocations and Internally Generated Revenue over the recommended period and determine whether it was in compliance with appropriate regulations, statutes, acts and laws of the University.

Investigate the application of funds, particularly special grants, loans meant for specific projects in order to determine the status of such projects and their relevance for further funding. Determine the adequacy or otherwise of staff and examine the quality of its staff development programmes.

They were also to examine  the “Law” establishing the University including the relationship between the various internal organs, units and offices (such as the Registry, Bursary, Works & Services, Health Services, Departments/Faculties/Colleges, etc.) and indicate the ways that the law has been observed by the competent authorities and suggest any modifications to the law considered necessary or desirable to enable the University to better achieve its objectives.

The Panel is to submit its reports and recommendations to the Governor of Ekiti State not later than December 10, 2018.