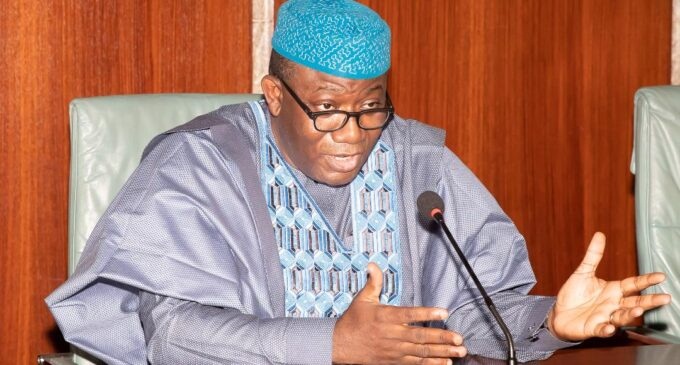 Ekiti State Governor, Kayode Fayemi has vowed that it will recover over N1billon debt owed by some of the beneficiaries of the State’s housing estates before the expiration of his tenure.
The Governor also restated the commitment of his government to reverse the impunity that has characterized land administration in the State.
Governor Fayemi disclosed these on Tuesday in Ado- Ekiti while receiving report of the Judicial Panel of inquiry on land and related matters in the state.
Apparently miffed by the level of corruption, poor record keeping and lack of transparency that characterized allocation of lands in the State, Fayemi directed the immediate constitution of ministerial committee to advise government on how to reform government apparatus in charge of land administration.
He said the commitment of his administration to eradicate unlawful land transaction was to achieve an effective land administration to enhance government’s efforts in achieving poverty reduction and promote economic growth.
The Governor who disclosed that government had been informed of the existence of vast undeveloped parcels of land and lack of record of ownership or evidence of payment for some properties in the state housing estates, ordered the committee on recovery of money owed the state government to present a formal report on it to enable government take necessary action.
“My administration is determined to reverse the impunity that has characterized land administration. As a first step, I accept the recommendation of the Commission of Inquiry for a holistic reform of all the agencies responsible for land administration in this State.
“I have directed the Secretary to the State Government to immediately constitute a ministerial committee with a mandate to advise government on practical steps towards achieving this goal.
“Let me also use this opportunity to formally acknowledge the work of the Committee on the recovery of monies owed the state government on the sale of landed properties in government housing estates.
The Chairman of the commission, Justice Adekunle Adeleye, in his remark revealed that 43 petitions and memoranda were received in the course of their assignment, adding that the commission through the adoption of alternative dispute resolution mechanism was able to determine 20 cases.
He said members of the commission also made on the spot assessment to various locations to test the veracity of the oral evidence given at the public sitting of the commission.