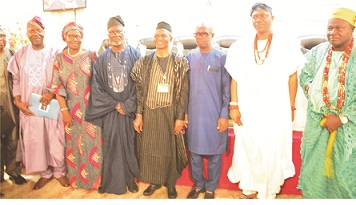 By Tokunbo Abiola
|
The Governor of Kaduna State, Malam Nasir El-Rufai has attributed the high quality human capital in the South-west of the country to the foresight of chief Obafemi Awolowo and his political ally, late Chief Michael Adekunle Ajasin in implementing the free education programme.

El-Rufai made the observation in Akure yesterday at a colloquium organized by the Ajasin Foundation to commemorate the 116th post humous birthday anniversary of the former Governor of Ondo State.

He said both Awolowo and Ajasin deserved commendation for the ingenious education policy which had improved the fortunes of the South-West region.

The Governor, who was the key note speaker at the event said the high quality human capital development in the South-West is a direct consequence of the free education policy.

He said if there was no elite consensus, it would have been difficult for Ajasin and Awolowo to have surmounted the opposition they faced in instituting the policy.

El-Rufai then gave the areas in which elite consensus in Present-day Nigeria could galvanise the nation towards economic development and social justice.

He said elite in the country should come to a consensus on such key issues as the rule of law, citizenship, meritocracy, diversity and devolution of power.

He then spoke on the theme of the colloquium, which is Promoting Economic Development, Social Justice and Rule of Law as Pathways to Stability, Peace and Prosperity in Nigeria.

The Kaduna State Governor said Nigeria could only achieve rapid national growth if governments all over the country institute the rule of law and social justice.

He said the rule of law provides an acceptable mode of conduct that guarantees fairness, which translates to economic development within a background of social justice and peace.

He said governments have a role to play in the dynamics because they have a responsibility to protect millions of vulnerable Nigerians who have been weakened by climate change, rapid social growth and pervasive poverty.

He said the fact that present politicians use Ajasin’s name to campaign showed that the late former governor will not be easily forgotten.

He commended Ajasin’s children for instituting a programme to remember their father’s legacies.

The chairman of the occasion, Senator Bode Olajumoke extolled the contributions of Ajasin in changing the face of present day Ondo State though his educational and industrial policies.

He also commended Ajasin’s children for organizing an initiative  for the past 20 years to make many remember the legacy of their father.

In her remarks, Jumoke Anifowose one of Ajasin’s children, said her father while alive focused on social justice, human rights and human capital development, a commitment that led him to fight the military in a bid to install democracy in the country.

She hoped that the colloquium this year would provide a workable template to usher Nigerian to the rank of economically developed nations of the world.

The Ajasin Foundation was established in 1999 to espouse and inculcate ideals such as personal discipline and commitment to public good as principles for the present and coming generations of Nigerians should imbibe towards economic development.