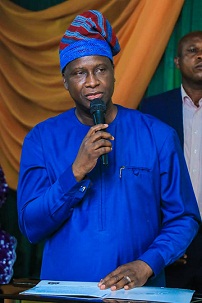 From Fisayo Akinduro, Osogbo
|
Politicians have been urged to live a simple lifestyle worthy of emulation with the fear of God.

The Deputy Governor of Osun state, Benedict Alabi gave the admonition on Monday during the 4th Ramadan lecture organised by the Prince Tajudeen Olusi Foundation in Osogbo.

Alabi called on all muslims including politicians to use the Ramadan period to pray for peace, unity and progress of the country.

He said muslims who are politicians must learn to pray for the growth of their country at this period and also live a simple lifestyle, worthy of emulation, with the fear of God.

He noted that fraudulent practices or hooliganism in the name of politics have no benefits in the long run.

“Politicians must learn to live a simple lifestyle and also emulate those who governed with the fear of God.”

The lecture which was delivered by Imam Shakirudeen Gafar, was on ‘Amaana’ which means trust.

The deputy governor who praised the forthright attitude of Olusi admonished muslims to promote peace and mutual understanding among all Nigerians.

In his address, Imam Gafar reminded political office holders that their positions were a trust by the people, as such they must not abuse the privilege given to them by the electorate  in order to avoid the wrath of God.

Gafar who made references to the Qu’ran and Hadith, said leaders should never betray those who believed in them as doing so has dire consequences in the eyes of God.

He therefore enjoined both leaders and followers to lead exemplary lives,  so as to have a responsible society.