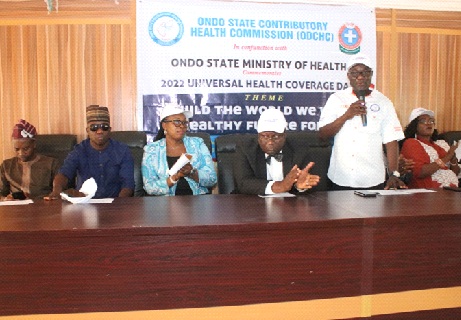 In order to achieve Universal Health Coverage through health insurance, stakeholders in the informal sector groups have been urged to get involved in the health insurance scheme of the Ondo State Contributory Health Commission (ODCHC).

To this end, they have been advised to embrace the Sunshine Health Insurance Scheme (SUNSHIS), an insurance scheme for the informal sector and organised private sector.

Commissioner for Health, Dr. Awolowo Ajaka spoke during a dialogue between ODCHC and informal sector groups on SUNSHIS in commemoration of 2022 edition of the Universal Health Coverage in  Akure.

According to him, the groups make up 95 percent of the state noting that they are critical in the achievement of UHC.

Represented by the Permanent Secretary, Ministry of Health, Pharm. (Mrs) Folukemi Aladenola, he stated that the state has been working towards achieving UHC with the commencement of Abiyamo Maternal and Child Health Insurance Scheme, Basic Health Care Provision Fund Programme and Orange Health Insurance Scheme adding that the commencement of SUNSHIS is in the pipeline.

In his remarks, Special Adviser on Health, Prof. Dayo Faduyile described UHC day as one of the committed cardinal attributes of the Arakunrin Oluwarotimi Akeredolu led government in ensuring that residents have access to qualitative health care.

He commended the Governor for making the state with the lowest poverty rate in Nigeria through his investment in the health sector.

In his opening remarks, Director-General, ODCHC, Dr. Abiodun Oyeneyin while thanking the Governor described the informal sector as the major stakeholders to make UHC a reality in the state, noting that it is important that more residents are brought on board under the scheme to assess health.

While stating the over 25000 residents have benefited from BHCPFP, he added that more residents will benefit in the coming year so as to cater for the vulnerable group.

In his Goodwill Message, SA on Transport, Barr. Tobi Ogunleye noted that the state takes the lead in every area that brings support and security to life.