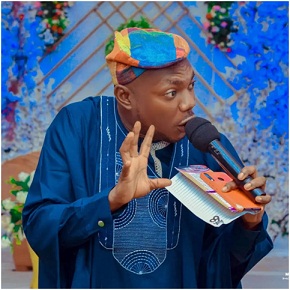 An Ondo based broadcaster and singer, Olukayode Churchill Ajayi, better known as Churchillkay bares his mind on how he got disconnected from Edo State Governor, Godwin Obaseki after producing his election campaign jingles in this interview with Friday Extravaganza.   Excerpts:

What got you into music?

Talent. Also, I started from the children’s choir in my church at a tender age. Although, I’m now a Broadcaster, but the zeal and passion for music is still in me. I released my first album in the year 2008, titled JEE KA YIN(Let’s Praise Him)

How did you come about your Emi lokan song?

I got the inspiration through the popular slang of one of the Presidential candidates. You know there was a time he said ( Egbe kini yi wa Emi Lokan), from that phrase I got inspired and I have the instinct that I’m the next to be blessed this year and beyond. The content of the song talks about being the next person to be blessed by God this year. (EMI NI RE KAN). I also have the belief that all my listeners will be blessed as they listen to the song too.

How best do you think the song will inspire your listeners?

Most of the songs I have dropped in the past have inspired and impacted the lives of my listeners from the testimonies I got from them, I believe EMI LOKAN will do more too.

Why is hard drugs synonymous with artistes, and is it not possible for artistes to perform without drug influence?

Because most  artistes are exposed to people of different characters in the society, but they failed to caution themselves, they allow the fame to enter their heads.

What genre of music are you singing?

My kind of music is known as Gospel Afro hip-hop and Highlife.

What do you think is responsible for some artistes who started well, but failed to hit stardom?

“No helper, only talent can’t make you hit stardom, if there is no one to help you or lift you up. You need someone to sponsor or assist you.

What is the most regrettable experience you have ever had?

“There was a big project I involved myself in 2016, I was the official artiste that recorded the campaign album for the campaign of Godwin Obaseki in that year in Edo State.  To the glory of God, he won the election, but it was so unfortunate that the person that linked me with His Excellency  died shortly after the election.  Since then I couldn’t get access to the governor again. The sad part of it is that some of my savings was part of the money I used for the project, with the hope of getting it back from my big brother who introduced me to the governor. Although, I tried to send messages to the governor’s number and his official email, but all my efforts yielded no result.

What other things do you do apart from singing?

I am an on Air Personality, MC/COMPERE, Voice Over Artiste, Event Manager Content Creator and Skit Maker.