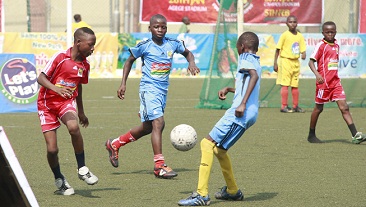 By Femi Atolagbe
|
Parents have been urged to ensure and encourage their children to participate in sporting activities right from the tender age.

This was the submission of Proprietor and parents of Best way International Nursery and Primary School,Akure at their annual Inter House Sports Competition.

Otunba Akin Oladapo,the Proprietor said it was the culture of the school to encourage sporting activities with education.

Oladapo said he was happy with the support gotten from parents in making the event a success.

The Proprietor noted that most of their products had already been leading different sports in their various secondary schools.

“The essence is to develop the children, to catch them young, to train and develop them, we don’t joke with sports, most of their seniors in the secondary school are doing well in sports. It will develop them physically,” he said.

A parent, Mrs Esther Daniels said she was happy to grace the occasion because it brought Joy to the children and the parents.

Daniels said she was not privileged she was a student to participate in sports, but will be happy to see her wards progress in sports.

Another Parent, Mr Ayeni Dada revealed that he was happy and impressed to see the pupils performed.

Dada revealed that sports was not being encouraged in the country, when compared with other climes

He said sports could be used to create jobs if children’s talents were discovered at the early stages.

Pink House emerged over all winner of the inter House sports, Yellow House won the first runner up position, while Blue and Green Houses won third and fourth positions respectively. Trophy and other prizes were later presented to the over all winner and others.