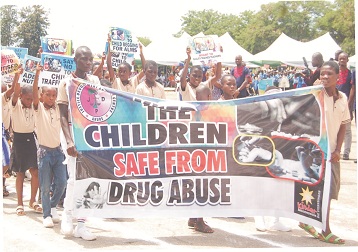 By Josephine Oguntoyinbo
|
There is no gainsaying the fact that children are the future of the nation. Without them, the nation’s hope of building a youthful and productive workforce greatly diminishes and the basic family structure appears imbalance.

Everyone who is an adult today had to pass through the childhood phase. The stage is unique because it is marked with moral instructions, home training and fundamental education. It is at this phase that our learning ability develops. If guided in the right path, children can perform marvellously. And if not, they can evolve into individuals that are capable of terrorising a whole nation.

Therefore, it would be understood if their welfare exceedingly matter to the Nigerian government. The slogan that “Children are the leaders of tomorrow” cannot be overlooked.

To this end, National children day celebration is held annually on May 27th to give special attention to issues concerning children, as well as to enable all stakeholders assess and strategize on how to bring such issues of concern under control. It would be recalled that in 2018, the focus was on creating safe spaces for children and the theme “Creating Safe Spaces for Children :Our Collective Responsibility” was chosen. This was in recognition of the increasing incidence of violence against young ones.

Before the grand finale, various activities had taken place to ensure that the message of the theme of this year’s celebration goes down to children and other stakeholders Among these were, parents and children discussion day, sensitisation programme on the theme of the celebration, Anti-Drug Abuse ambassadors competition, School variety day, Radio and Television discussion on the theme, parade rehearsal by children among others.

In Ondo state, the state government leave no stone unturned to celebrate the children as various colourful activities were held in commemorating the 2019 celebration.

At a one-day sensitisation and anti-drug abuse ambassador competition organised by the state Ministry of Women Affairs and Social Development for  students of the state as part of activities marking the day held at the Babafunke Ajasin auditorium, Akure, the state commander, National Drug Law Enforcement Agency (NDLEA) ,Mr Haruna Gagara declared that drug abuse poses a great problem to the Nigerian children, the government and the society at large.

The commandant who spoke on the topic “Drug abuse among children :Addressing the challenges ” affirmed that drug abuse threatens the sustainable growth and development of the future leaders.He called on all stakeholders  to play a key role in waging war against the menace in the country.

He believed that if concerted effort are made towards the eradicating of the ugly trend in our society, it will go a long way in saving the children and protecting our future.

According to him, some years ago, drug abuse was seen as a scourge among youths, particularly those in the higher institution but recently children below the ages of thirteen has been found to abuse drugs such as tramadol, codeine, cannabis,a lcohol among others which called for urgent action.

He listed stages of drug abuse to include, experimental, occasional/social use, regular use and addiction stage which its consequences are physical, psychological and social.

Gagara called on parents, particularly mothers to improve on the level of parental care, sachools authority should improve on teaching, guidance and counseling ,government to formulate policies that will discourage the act while religious organisations should preach against It.

Speaking on the health implications of drug abuse for children, the programme officer, Non communicable diseases, state ministry of health, Mrs Kofoworola Jegede said drug abuse lead to high risk behaviors and all forms of communicable diseases which can lead to death noting that the best thing children can do for themselves is to focus on their studies and shun negative distractions.

The Senior Special Assistant to the State Governor on Women Affairs, Mrs Titi Adeyemi explained that the present government in the state is taking the bull by the horns to ensure that the menace of drug abuse is eradicated in the society.

Mrs Adeyemi said that the importance of the event is to sensitise the children about the negative effect of drug abuse, keep the line of communication open with the children and involve them in the discussion on matters concerning them.

Earlier, the Permanent Secretary of the ministry, Mr Alaba Adeyemi noted that the event is one of the series of programme preceding the children day coming dedicated to celebrate and address issues affecting children worldwide with emphasis on local and regional peculiarities.

During the event, a highly contested Anti-Drug abuse competition was held among the school children where the Ondo State children Anti-Drug Abuse Ambassador emerged in the person of Miss Ogunlalaka Favour, she was among the two children who represented Akure South Local Government at the competition. Deputy Ambassadors from the participating local governments equally emerged.

At the grand finale of the celebration held at the Gani Fawehinmi Freedom Arcade Akure ,the Ondo State Governor, Arakunrin Oluwarotimi Akeredolu decried the high rate of drug abuse among school children in Nigeria and called for urgent action to win the war against this menace to save their future.

He solicited the support and cooperation of relevant stakeholders including parents, school administrators, traditional rulers, religious community  leaders, security agencies, market men and women and the children themselves in the war against the disturbing trend, noting that governments alone cannot do it.

The governor who reiterated that the promotion of qualitative education and the general well-being of Ondo State children remained a top priority in his development agenda for the state, observed that government efforts in the areas of massive construction and rehabilitation of schools and roads  throughout the state as well as school feeding programme for the comfort of school children would amount to sheer waste if the children continue to engage in drug abuse.

He further called for sustained advocacy, stressing that children by nature are highly vulnerable thus making it relatively easy for them to fall victims in the hands of drug addicts who by all means want to win new converts.

The governor also revealed that since the inception of his administration, it had focused its attention on addressing issues pertaining to child protection, participation and survival, adding that the war against drug abuse was also ongoing in the state through radio/TV jingles, sensitization programmes and policies enlightenment campaigns.

He also disclosed that necessary steps are being taken by government which include Mobile Community Sensitisation and Mobilisation Services recently introduced by the state Ministry of Women Affairs and Social Development to further address menace of drug abuse among children.

Earlier in his address read by Governor Akeredolu, President Muhammadu Buhari, who congratulated the children on the special day advised them to stay away from using abusive and addictive substances and concentrate on their studies, as his administration would ensure a conducive learning environment for them to develop their potentials.

Earlier in her welcome address, the Special Assistant to the state governor on Women Affairs, Mrs Titi Adeyemi posited that the issue of involvement of children in drugs abuse is a major  concern saying that various activities organised for the children to commemorate the day in the past few weeks have been able to achieve the desired goals.

In his goodwill message, the state Commander of NDLEA, Mr Haruna Gagara commended the state government for recognizing the devastating consequence that drug abuse can have on children if not checked.

The representative of Ondo State Agency for the Control of Aids (ODSACA), Mr Benson Ogunfuyi who took the children through the prevention of HIV noted that total abstinence is the key to HIV prevention among adolescent and young people.

Speaking with The Hope, The permanent secretary, state ministry of women affairs and social development, Mr Alaba Adeyemi affirmed that the celebration in the state has been filled with a lot of activities and programmes in the last ten days  which is a clear demonstration of the concerted effort of the state government to ensure that the children occupy a place of pride among their peers in the future.

Some teachers at the occasion opined that parents remain the major custodians of their children hence the need for them to properly monitor their children while the school managements and the teachers will also complement their efforts in ensuring that students imbibed the spirit of hardworking and good habits.

Cross section of students who spoke in separate interviews, thanked the state government for taking their welfare as priority.

While applauding the present administration for renovations in schools and the prompt payment of teachers salaries in the state they promised to be good ambassadors of the state anywhere they find themselves.

Highlight of the occasion include the decoration of the state children Anti-Drug Abuse Ambassador and Deputy Ambassadors who are to be working closely with the ministry and other stakeholders to reach out to other children on the issue of drug abuse, march parade by children from the eighteen local government areas of the state, special rendition ,handwashing,presentation of prizes and certificates to schools who distinguished themselves at the event among others.

Meanwhile, all special schools in the state went home with prizes while the best behaved school prize went to Bolafoluwa Secondary School, Akure.

Apart from food and drinks made available in abundance for the children, they also smiled home with customized bags and books, at the event.